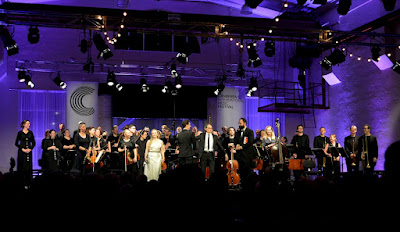 There were seven days of Creation and they were covered within parts 1 and 2 of Haydn's Creation at the Canberra International Music Festival, if I got the lyrics right.  So what of part 3, after the interval?  It may have been Adam and Eve enjoying each other, for there were some lyrics thus suggesting.  But then I didn't get all the lyrics.  I was entranced by the truly excellent bass playing of Kirsty McCahon sitting tall and up front and I didn't catch much of the rest.  Even the whales that James mentioned at interval.  Well, maybe they were a big bass part (?) but I was just watching the bowing and hearing the incredible projection of one baroque, presumably gut, bass amongst such a large ensemble and the way she seemed to almost ignore the music and look around constantly.  I downloaded the music this morning and it's not so difficult to read, being baroque, but still, I was in awe.  But otherwise, the individual singers were very good to great, the chorus was impeccable, the orchestra based on the Australian Haydn Ensemble was tight and expressive and Chad, who I drove the other day, the keyboardist, was Euro-confident and again someone who knows when to raise his head from the music, the baroque horns just sounded great and Roland was his hyper-energetic self as conductor and driver of it all.  I was in awe from the first few minutes from the tightness and clarity and precision and overwhelming baroque beauty, and it just continued for the two-or-so hours of the performance, but then, for the sake of the occasion and the musical beauty, I was prepared to ignore some distinctly dated, particularly non-feminist awareness.  Did I say I enjoyed it?  Yeah, and the bassist was good too.