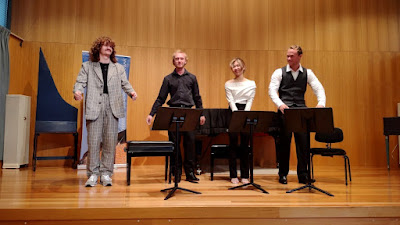 Today's Wesley was a six string of classical guitars from ANU, mostly playing solo but one trio.  Playing Bach and various Spanish and Latin American composers.  It's a common repertoire for this instrument and attractive.  I thought at one stage of guitar as one of those instruments that's a "whole orchestra".  I say that about piano and it's the great instrument of this type, but guitar does it too.  I think it's the ability to play multiple lines, melodies and chords, contrasting harmonies and even sometimes rhythms.  I felt that in some of the Spanish styles, if less in Bach.  Three of the four finished the concert with an intriguing trio piece that was very different, not least for being an ensemble work.  First up a bass line and opening chords that suggesting blues changes then into more classical structures, then passing melodies and accompaniment between the players with short stops for thematic and role changes.  The work was Maximo Diego Pujol Fin de Siglo (1995).  That's one to chase up.  So an interesting survey of classical guitar by a capable quartet of players.