Now this was fun.  Six is the musical story of the six wives of Henry VIII.  We went on advice from a musical-theatre friend and it was a ball.  Nothing like the serious classical stuff. This was theatre as Reality Game show with six contestants telling and singing their stories, here all related.  And it was a women's event.  Women were mightily represented in the audience, the six wives were obviously women, but so were the four Ladies in Waiting (the band) and even the sound and lighting guys were gals.  There was a feminist theme at the end, well observed but none too strongly stated, and a good deal of competition between the six (I thought of another word to my shame).  Not that there weren't males involved (the writer was a bloke and there are others amongst the "creatives") but the women's theme was maintained.  The songs were modern pop, so lively and harmonised and thumpy, and the six were on stage for the whole 75 minutes, singing or reciting or harmonising or dancing (mostly all at once) and generally working their hearts out.  We went to the 6pm session and they were on stage again that night.  It's not a long show but it is energetic.  But they were trained for this: the dancing was impressive, the harmonies were neat, some were better solo singers than others but they all used their voices well.  And the band was there but not too obvious, except for their  introductions with the searing guitar and slapping bass and thumpy flashy drums.  We were involved and conversed with (much more than just "Hello Canberra") and the audience was onside and standing to dance at the end.  And the staging was drenched in bright light, sometimes flashed with tight sound, very strongly feeling like the proscenium that this theatre is, or perhaps like a TV.  As in Reality...  Did I mention that we enjoyed it?  Yeah, I did and we all did.  Walking out with a jump in our steps, with Megan telling me of the survivor and her life-love and later husband who she found in flagrante delicto with future queen Elizabeth.  And how the story was pretty well told.  So huge fun well done and true too.  What's not to like? 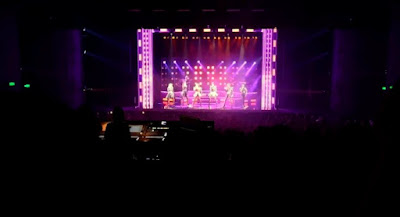