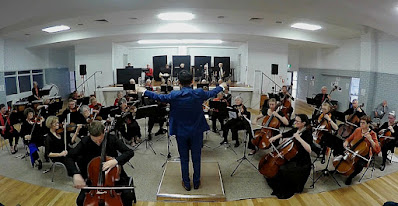 Brindabella Orchestra played on Sunday and I sat it.  Nice program, nicely developed orchestra with Shilong Ye as the current conductor, nice cello solo on a Dvorak Rondo for cello and orchestra and overall a great little program.  None too difficult but musically interesting.  More Dvorak with a few Slavonic dances and Gounod Faust for more dances, although more balletic in style.  Both those were lively outings.  Faure Pavane was mightily different.  Not hard but demanding soft, responsive pizz throughout and really quite beautiful.  I relax with pizz, being a jazzer, but it taxes my sense of time.  I do tend to sit ahead of the beat in jazz to drive the swing, but classical requires pizz right on the beat and it can be unforgiving as pizz from a string of instruments arrive at different times.  It can happen.  The Cello Rondo, too, had some lovely touches, bowed, but reminiscent of pizz, a two feel that moved behind the cello melody from solid and tight to bouncy and balletic.  It was a very satisfying change and a similar thing appeared in our last work, Brahms Academic Festival Overture.  It's the third time I've played this in concert so my understanding is expanding.  Brahms is perhaps my favourite composer, not for difficult or busy lines but for clever constructions and variations.  AFO is a hoot, they say drinking songs and the university theme song, written to announce his honorary doctorate.  It just seems like all manner of styles and snippets thrown in together, brilliantly contrived, gorgeously humourous, mostly pretty playable, but a few testing syncopations and descending themes.  Great stuff.  It often brought me a chortle at the audaciousness of it all.  Thus another concert much enjoyed. Thanks to Brinda and Shilong and Sam and Celeste who invited me.