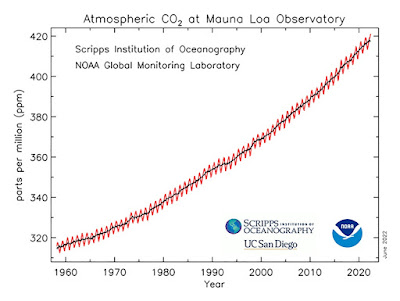 Australia has found another hero courtesy of governments closing down climate action.  It's a sad story and a real concern for our Human Rights record.  But  the show must go on, at least until it won't anymore.  And that's not too far off, given floods and fires and incessant new mines.   Deanna 'Violet' Coco is in jail for at least 8 months, perhaps 15, with no bail while she lodges an appeal.  It's scary.  Her action was a big one and notable, closing a lane of the Sydney Harbour Bridge, but the subject of her non-violent protest was immeasurably more significant, the end of civilisation, no less.  And it's not as if we are succeeding in our actions on climate.  Just see the graph above and despair.   And now we read a report that an uncle is a NSW pollie and agrees with the decision.   Even family ties don't seem to bring a pause on this issue and this largest of all industries, energy.   We are in peril.  Youth sees it and they will suffer it while power does the little it must.  Read up on this case and despair.  Here are a few references.

To finish, my climate warning of 2014 remains true.  Here's my summary that I sent to PMs, pollies, editors, etc,  I still think it's a good summary.  To me, the "tipping points" are the killer, but you don't hear so much of them these days.  Maybe they are trying avoid widespread despair?

All you really need to know about climate change. We're one big civilisation and climate is changing fast given a sudden imbalance of carbon since the industrial revolution. The mechanism of greenhouse gasses has been known to science for 150 years or so and we're at 400ppm and adding another couple each year, and 2 degrees warming (guessed to come at 450ppm) is a rough, perhaps optimistic, estimate of where runaway climate change could happen given various feedback loops (the ubiquitous "tipping points") and it looks to me like we've got Buckley's chance of staying within 2 degrees. With business as usual, IPCC estimates 3-6 degrees rise by 2100. That's just 86 years. Scientists provide the proof of all this for honest readers. To me it looks like game over and sooner than we think. I just hope I'm wrong because nobody wins an argument with physics.

Deanna 'Violet' Coco joins Greta Thunberg as an authentic CJ Climate hero.  For her commitment and bravery in the face of political and social intransigence.

David Ritter, CEO of Greenpeace Australia Pacific, said the right to peaceful protest is fundamental to democracy, and the laws were “rushed through in a chilling and knee-jerk response to ongoing peaceful protests”:

[They] are the latest in a suite of increasingly draconian measures introduced in Australia, designed to curtail peaceful public dissent.

What these laws fail to acknowledge is that climate activism does not exist in a vacuum. People are feeling compelled to take a stand only because of the fossil fuel industry’s wanton and knowing destruction of our right to a safe climate over the past 50 years.

While tactics and approaches to climate advocacy may differ, and there are legitimate differences of opinion on what forms of advocacy are most effective for winning hearts and minds, the fact remains that the inconvenience caused by the climate crisis – catastrophic floods, fires and storms destroying homes, livelihoods, and entire communities – staggeringly outweighs the inconvenience of one climate protester blocking one lane of traffic for 25 minutes.

What we must remember is that climate change isn’t happening to us, it’s being done to us. It’s being done to us by the executives of the fossil fuel corporations, and they know it. Just as Ms Coco knew that her act of protest would disrupt one lane of traffic, these executives know that their relentless pursuit of profit is disrupting the lives of billions of people and every species of life on our entire planet.

Coco is now out of prison on bail. Not sure how that matches with a non-parole period of 8 months. I am not law trained. But it's a good action. Still, cheers and thanks to Coco and her mates. They are doing a necessary job, even if it's not well accepted in the wider community. / Eric