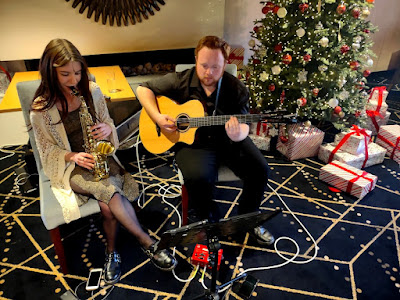 The National Press Club is my go-to on a quiet Friday evening when I want a short outing with beer and some entertainment.  It's local and easy parking and a happy half-hour to boot, let alone some of the best local players, even if the playing tends to kept fairly tame in this context.  This night Mereki Leten and Michael Larsen-Collins were playing.  Not a pair I knew but they were described as a "up-and-coming sax and guitar duo" so all sounded good.  I enjoyed them with capable playing of standards and latins and the like from their differently keyed iGigbooks on the music stand.  Mereki had some flourishes that hinted at considerable chops and I loved how she played conterpoint to several of Michael's solos.  And Michael's solos and chordal backings were worthy outings; not surprising from an obviously serious student of Greg Stott.  For some audience involvement, I requested Alone together and they didn't know it but they did a very decent read.  Then chatting, I realised Mereki was the female saxist that my band, Tilt, had got in for a gig a few weeks before when I was out of town (with bassist Barney Briggs).  I felt there was due respect all round for that outing.  So, some names I didn't know until now, but surprisingly close to home.