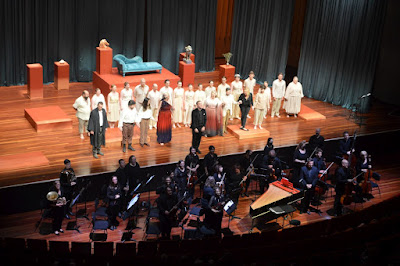 I read of Handel's late baroque opera, Alcina, being performed at Llewellyn in the Saturday Canberra Times just in the morning.  It was the second of two performances and I was free and it's not often we can see serious opera in Canberra.  So the ticket.  It immediately followed a long jazz gig so it was a rush but I got there.  The audience wasn't large and that was sad.  This is an attempt to create a serious opera company in the national capital.  It's an expensive process and they need support if it is to happen.  I checked Alcina on Spotify: 3hr 23min.  Mmm, that's a call.  In the end, this was a sparse stage with mostly just a small company lasting 3hr including an interval.  So it was a challenging outing but it quite lovely.  This is opera seria of 1735 with a chequered history: debuted then not performed for ~200 years then a feature for Joan Sutherland and Cecilia Bartoli and others.  I think it was also the first time I've seen musicians in a "pit" at Llewellyn.  Not a true  pit, perhaps, but  replacing the first rows of normal seating.  This was not Aida or the like.  the music is very different and the lyrics are totally sung.  It started with an overture then mostly short scenic numbers with exploratory notes projected above to explain the complex story of Queen Alcina, sorceress, and sister Morgana and heroic knight Ruggiero and his fiancée Bradamante and various loves and affairs and spells and magic rings and Oberto and his missing father.  I read that it was derived from Orlando Furioso.  The libretto was from Italian Antonia Fanzaglia (Wikipedia says the original was from Roberto Broschi).  I could pick the Italian occasionally when I listened carefully, but mostly I just took in the music of it all. Sung opera is not easy to understand at the best of times.  I enjoyed the whole, and it was a long whole.  The music is delightful, being of that hugely attractive era, and nicely played by ~25 members of the Canberra Symphony Orchestra.  The singing is in the same style, of course, melodic and expressive and richly embellished with scalar extrapolations.  Handel also included some dance sequences so 6 dancers also featured. But mostly the stage was fairly bare with 2 or 3 or 4 central characters singing their story.  I was a little discombobulated by the voices.  Ruggiero was counter tenor and cross-dressed fiancée Bradamante was sung by someone from the side.  And missing father's son, Oberto, was played by a woman.  It suits the time.   And interestingly, there were six dancers for several musical sequences.  It was a long session and I'd gigged that afternoon and rushed to it, but I was glad I attended.  Baroque opera performed with serious intent and worthy quality.  Best of luck to the National Opera.  And to finish, some delicate quotes from the descriptive projections: "One moment's happiness turns all true lovers' tears to joy";"Enduring love and compassion will help bring back happiness after so much suffering".

Handel Alcina was presented by the National Opera at Llewellyn Hall.