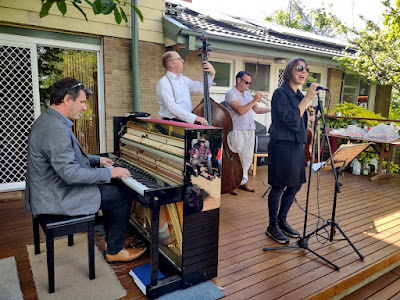 Paris comes to a backyard near you.  Aussie bassist Leigh Barker grew up in this house and performed a garden concert for friends of the family.  Leigh has ventured to Melbourne then to Paris with his singer/violinist partner Heather Stewart and they now have two young Parisians to fill the family but he still comes home every so often and plays tours and clubs and backyards and the like.  This time they'd also recorded in Melbourne.  I got to the backyard gig and it was something special, like our own jazz club with sun.  The day was good and the deck was new and stage-like and rang with taps and the piano could be rolled straight out into the open.  Leigh and Heather had Matt Boden from Hobart and Dan McLean from Michelago.  No drums, but the pulse was strong, the bass certain and voluble with the expansive piano and forthright trumpet.   There were plenty of quips and gasps and whoops shared in this style and the humour was skin deep but articulate and the groove was ever-present.   This is early jazz and not something I chase but a huge pleasure when done like this.  I was all tapping toes, as I should be.  Heather explained her new Guanieri-like violin's subtleties (essentially the Strad/Guanieri dichotomy but to all, I guess, it was pretty much unnoticeable without the two together) but the slides and delicacy were what mattered and her voice, so perfect for the era, just rang so, so true.  I think of Paris as a comfortable home for early styles (but not just: I heard Hadrien Féraud there and he's no slouch and nothing at all early).  They played WC Handy and Ellington and Fats Waller and Jelly Roll and Gershwin and even Rudi Valli and just one original, a dedication to a friend, Adriana, by Heather.  Not just another club gig but a bundle of joy of great musical skills and a huge pleasure.  Thanks to Leigh and Heather and Matt and Dan.