Rob Shannon, musical director and guitarist of Arabesk, has a diverse musical background. He began on drums and journeyed to India to study Hindustani percussion and on his return to Australia he found it more professionally worthwhile to also play guitar. He is the rock of this band, his knowledge of styles fusing a bunch of idiosyncratic musicians. 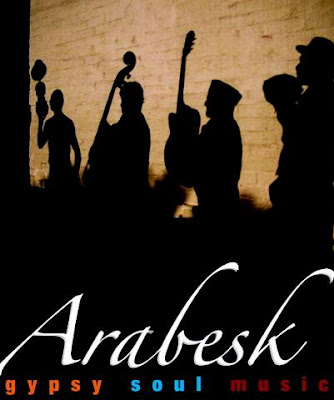 After violinist Veren Grigorov emerged from the audience and joined the other band members they never looked back. Their music had punch, drama and not a bit of craziness. There were some atmospheric numbers reminiscent of shifting Arabian sands, but on the whole this was the music of the bazaar.

The band's most obvious progenitors are the Reinhardt-Grappelli duo with the violionist taking the lead. But it's no long-shot to compare Grigorov's virtuosity with the daredevil antics of Paganini two centuries ago, although Paganini was also a competent guitarist. That's the only way one can knock Grigorov off his pedestal – to compare him to past masters.

What more can one say about the violinist? Can he be imprisoned in words? On stage he cannot contain himself and is a live wire on the verge of literally electrifying the audience. If he existed in Elizabethan times he would make fine jouster. He handles his bow with dexterity and precision. He only dropped it once to prove he was human. How many bows did he have? Only two were seen at any one time, but out the back there was a whole horse ready to provide hair. And we haven't even discussed his playing yet. Perhaps it is easier to reference his playing by describing the accompanying body language. He must walk around the backyard and house attached to his violin for it seems they are one. He has combined the career of modern dance with captivating and frenetic violin playing. While he runs through gypsy modes his knees twitter.

When he hits a revelatory chord he springs in the air. Grigorov can imitate, bird, dolphin, wolf-whistle, the “neeh-nih-neeh-nih-neeh-nih” of the playground and a host of other unidentifiable sounds.

At one point it seemed the drummer and violinist indulged in a tiff which Shannon distracted the audience from by relating anecdotes. Welch refused to make eye contact with Grigorov for the rest of the set. During the interval they made their peace, although Welch refused to catch any more of Grigorov's leaps on the cymbal. Along with Shannon, their new bass player provides a solid and feisty underpinning. His expression showed his commitment and despite being distracted by the flailing provocative gestures of Grigorov, he never lost his cool.

For a fitting finale to the final piece (not including the encore) Welch launched into a 12 minute drum solo. At times it was tribal, martial, tense, risky, self-assured and virtuosic. One word could describe it: exhilarating. When questioned after the performance about the length of the solo, he replied, “I thought everyone was getting bored.”

The majority of staff at the Southern Cross are attentive and kind. There is a minority, however, who should improve their etiquette. When one asks for directions, one points relative to the customer's left or right. When asking for directions to the nearest smoker's niche we found ourselves in the denizens of club operations because the attendant was referring to his left and we, self-centred bunch us fellows are, assumed he was referring to our left. Also, when I reentered the main entrance after a breath of fresh air, one attendant, escorted by two burly security guards, proceeded to say, in no uncertain terms, “You just came in here! Where are you going?” etc etc, to which I replied, “I'm with the band Arabesk” and all was settled. Not to take the glamour off a superb outing. I would repeat the experience many a time, and urge all lovers of music and showmanship to do the same.