Under Black Mtn, the Gods (JG1)

Under Black Mountain lie 'The Gods' of ANU – a small cafe where poets, painters and musicians meet to listen, discourse and splash paint. Well, maybe they don't splash paint but the place is like a mini-gallery where artists can display their conceptual work. 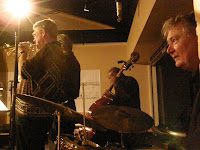 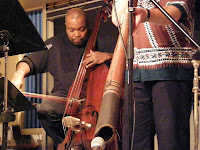 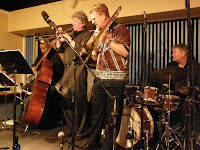 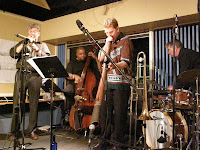 The Gods is appropriately opposite the Careers Centre and next to STA Travel. Artists looking for work need go no further than five steps across the lane, apply for a job, then head back in for a coffee. Musicians with the money to travel can check out the latest airfares to New York and Paris, spiritual homes of jazz. But Canberra does well to protect its talent from the big smoke of Sydney or the sophisticates of Melbourne (tongue firmly in cheek – ed.)

Tuesday evening saw the continuation of a series of jazz performances organised by Geoff Page. This gig combined the best from Sydney and Canberra under the banner of the James Greening Quartet.

On drums, the effervescent Colin Hoorweg set lively and syncopated beats. He is particularly impressive on the latin numbers where he freely makes use of the tom-tom Max Roach style. His brush work on the cool numbers was refined and allowed the music to breath. He never misses an offbeat on the high-hat. Miroslav Bukovsky's trumpet playing is second to none in Canberra and needs no summarising. Whether playing acid jazz, swing, cool or bop, his playing reflects the nuances of the band around him and lifts all performances to a higher level.

Eric Ajaye is Canberra's best kept secret. An accomplished bass player across all genres, Eric's latin grooves are reminiscent of the bass player on Freddie Hubbard's ground breaking composition, 'Little Sunflower'. Speaking of trumpeters, James Greening pulled out the pocket trumpet for a few numbers, delighting and surprising the audience with his fluid lines and mellow tone. But the trombone is his signature instrument and he plays it as it should be played. He doesn't try and imitate the sax or trumpet with too many notes – instead he makes use of the trombone's slide and produces wistful blue notes and weaves hypnotic narratives.

The band enjoyed themselves and after settling down, indulged in some witty repartee amongst themselves and between themselves and the audience, who were relaxed and cheerful. And so another evening at the gods was wiled away. Along with the Hippo Bar, this is Canberra's most intimate venue for jazz.