Bring on the festival circuit

The larger ensembles at the Jazz School are reformed at the start of each year with auditions and a new line-up. The auditions are competitive, so a hot new player in first year can bump a timeserver from a later year. The resulting changes mean the bands have to reform and develop anew each year. We can watch this growth over the year, as the bands first come out in May/June, then work towards a few feature festival shows at the end of the year. The festivals include Wangaratta (that’s a biggie), and Moruya or Manly. Locally, we can see them in the Band Room at the Jazz School, or even tiptoeing the tulips at Floriade. 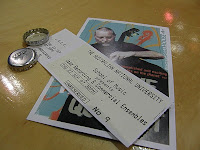 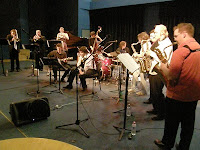 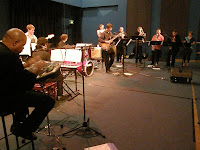 The Recording Ensemble and Commercial Band played last night in the Band Room. It was a small audience, but it was a very pleasing show.

The Recording Ensemble played first. It’s led by Miroslav Bukovsky, who introduced the band, and also provided several charts. Miro’s charts were Moon too soon and My Aunt Helen. Helen was the finale. It’s a very well disguised blues and was my favourite for their performance. Moon… was a chart written for 10 Part Invention, gentle with a sustained underlying rhythmic pattern. James LeFevre provided an arrangement of Bouncing with Bud. They also played Little Shorter (also jokingly called Quarter Shorter; obviously dedicated to Wayne of the same name) by Jenna Cave, the school’s star arranger/composer of recent years, and Ellington’s Wanderlust. The band was playing with replacements on bass and drums, so the quality was doubly impressive. Evan Dorian sat in on drums, and a newcomer bassist, Chris Pound, played his double bass capably and with great maturity for the gig. Very well done.

The Commercial Ensemble played after a short break. Eric Ajaye introduced the band. This is more an up, rock influenced, variety TV show outfit. They were blowing a storm: more confident since the Open Day gig a month ago, and ready for the festival circuit. They played several new tunes, and some I’d heard before. I particularly liked What’s the matter by Matt Harris, with its hard, sustained, finger funk, Tower of Power-style energy. I’ve got to mention the consistent and hot electric bass playing of Stu McKnown. It was a blowout: great tone and subtle shifts from finger to slap styles, loads of concentration, efficient fingerwork and hard ahead groove at all times. Also, Sophie Leslie’s singing on Les McCann’s Compared to what and on James LeFevre’s arrangement of a Steely Dan tune, Sign in stranger, which was all California-relaxed, sharp accents, truncated bars and funky/rocky as all get out. Evan Dorian drummed for both bands, and was in touch and subtle throughout. (Rhythm sections like these make a band. It must have been pleasure to play over such solid grooves). Other tunes on the night were by The Hornet by the Yellowjackets, Fall madness, Bill Cunliffe’s Napier and another Matt Harris tune called Beijo inocente, with its rollicking TV theme-tune style. The Comms were playing with abandon, hot and confident. A pleasure to hear. Looking forward to hearing them again at Moruya.

You can catch the large ensembles this coming week at Floriade. The Big Band plays 1pm, Wednesday; the Commercial Ensemble plays 1pm Thursday. I’m not sure of the Recording Ensemble. It may play 1pm Friday, but check out with Floriade or the Jazz School. All three bands play at the Moruya Jazz Festival in a few weeks time.

NB. I just realised this is CJBlog post no. 150. Wish me luck for the next few hundred.
Posted by Eric Pozza at 8:26 pm