Two bars to a treat

Text and pics by Brenton Holmes. Mike Nock Trio - Mike Nock (piano), Mike Majkowski (bass), James Waples (drums) with Jacam Manricks (alto sax, NY) at Hippo. It only took two bars and I knew I was in for a treat. Majkowski and Waples laid down an impeccable muted intro on bass and drums. Enter Jacam Manricks - mellow, haunting. His lyricism was remarkable. The tune, Aeronautics, was his own, but this was no flashy-just- flown-in from-New-York routine. Instead we heard a gentle, perfectly shaped line that oozed musicianship. When he moved up a notch into his solo the phrases lengthened, the tone brightened, the contours had a more dramatic sweep. But the lyricism stayed. Manricks built the intensity, working off a rhythm section made in Mike Nock heaven, opening out into long, running sweeps, running up staircases of notes, delivering swirls of impressive virtuosity. Still the lyricism stayed.

Waples gives a lot of drive from his ride cymbal, and there's power in everything he does, but while his presence is strong, he's not intrusive. Majkowski has to be one of the finest bassists on the Sydney scene, and he and Waples have a rapport that glows. Their playing was one of the unrelenting joys of the night.

When Nock took his first solo in the tune I was struck by how much it reflected Manricks opening style. Whether this was a deliberate ploy, or just intuitive ensemble music-making, it worked brilliantly. As he built up a head of steam, we soaked up vintage Nock. Sadly, his new electric piano wasn't doing him any favours. Something about the settings had the instrument sounding more organ than piano. As a result, clarity suffered , and what would normally have shone as a sparkle of notes came out more as a smear of tones. It was something Nock had to contend with all night – although some judicious tweaking improved things a little in the second half.

The rapport between bass and drums extends to Nock. This is a trio that clearly enjoys each other's company and shares a deep musical intimacy. You can almost feel them listening to each other. Their responsiveness extends to the most subtle of interactions. It's like they share a fused musical brain. I found the effect extraordinary, and one which is decidedly rare. I struggle to recall a similar trio experience. 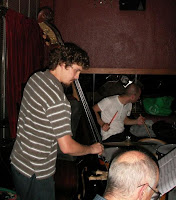 When Majkowski solo-ed I couldn't wipe the smile off my face. He was rivetting - strongly melodic, not a cliché in sight, and technically superb. His effort was short and sweet – something which characterised almost all his solos. They are the musical equivalent of those wonderful 9x5 masterpieces of the Australian Impressionists. Everything you could wish for is there.

Super Side Slippery Skip, the second tune of the night by Manricks, was a straight ahead swing with the intricate melody doubled on sax and piano. There was something cheeky about it – almost like it was a parody of a blend of the most played tunes in the Real Book. But it cooked. The rhythm section locked into a groove while Manricks gambolled all over the place - kinda Dexter Gordon meets Ornette Coleman with a dash of Dave Liebman. The band then really began to open out, managing to achieve a more expansive ensemble feel through the seemingly contradictory process of all the players pumping out solos simultaneously – a kind of bristling inventiveness.

When they dropped back to give Mike Nock some space he gave the lower registers of his still muddy piano a serious workout before moving into a more atonal style higher up the keyboard. He switched back and forth between sections that were rhythmically and harmonically conventional and passages of very free, angular and arresting playing. Again, bass and drums were with him all the way. Waples was particularly adept at building off and responding to Nock's soloing while the other Mike continued to give them both all the nourishment they could possibly need.

Majkowski again delivered a striking solo – full of invention, bending rhythms to his purpose without a hint of losing structure. Then it was time to swap fours between drums, piano and alto. Waples made the most of every four that came his way. Each time, he took his material from the preceding solo, sculpted it into a new shape and handed it back as a shiny new toy. Nock and Manricks clearly enjoyed it. The number closed out with a return to the melody doubled on piano and sax before wrapping with a tight, neat finish. 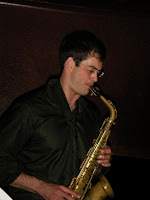 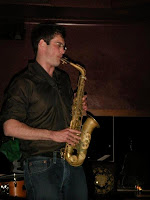 Next up was, for me, one of the highlights of the evening – probably because of its audacity. Manricks took the over-exposed Australian folk tune Bound for Botany Bay and turned it into an arrangement in 5/4 time that was a sheer delight. When Manricks moved into his first solo he again revealed the polished professionalism that his recent years of hard work in the US have no doubt helped him to achieve. You could hear the main Botany Bay tune being morphed one note at a time into its improvised version. Manricks kept faith with the strong 5/4 rhythmic phrasing as the shift evolved, then simply freed himself from it to sail breezily into an extended solo. Majkowski complimented the effort with another fine solo of long clear lines, never sacrificing the music to technical cleverness. On this occasion, Nock's solo seemed a little flat, though I suspect it was largely a product of his having to deal with the uninspiring sound coming from the piano.

The last tune of the first set was Mike Nock's Transitions, a pacey number with a backbeat funky feel and punctuated phrasing in its opening section before kicking into a fast swing. The funky section gave a strong structural foundation to the piece, and the switch to swing was effective when one might have expected it to feel cliched. Nock's chord voicing skills were on full display in his accompaniment. It's obviously a tune that he has a lot of affection for. His solo mixed short flurries of notes with long, chromatically ascending stretches that drew the rest of the rhythm section with him. The master was strutting his stuff and the apprentices were with him all the way.

Waples entered with a dramatic drum solo, but the sustained high volume playing pushed it into more a technical display than a musical statement. It would be unkind to judge him harshly on this account, because throughout his ensemble playing Waples had consistently demonstrated his credentials as an inventive, musically strong drummer. A nice, tight ending out of the funk theme closed the set to the enthusiastic applause of a very satisfied audience.

Manricks introduced the first number of the second set with the warning “don’t try this at home”. Creatively titled Number One, it was a full-blown excursion to the avant-garde – a musical Jackson Pollock on speed. The audience loved it. The very free-flowing alto introduction offered no obvious meter, and as Nock moved in, the piano and alto locked into a dance that steadied the piece for take off into totally free fireworks. It was all there – bowing, slapping, squeaking, thumping, full-frontal atonality. It would have done justice to a contemporary art music gig in Vienna. The music ebbed to a reprise of the opening section, with piano and sax shadowing and echoing each other, then swelled to a climax of slapped bass and pounded floor toms before tumbling gradually into silence. 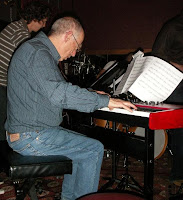 Mike Nock’s Homage was next on the list – a gentle swing that really gave Nock a chance to shine. Again, it proved the trio to be very much at home as an ensemble, with bass and drums giving exquisite support. When Manricks introduced the main tune on alto it put me in mind of the song melodies that the brilliant Stephen Sondheim has given us. The mellow solo was eloquent over a sustained pedal bass. Manricks played with the notes like a kitten patting a ball of string. Nock’s solo kicked off with handfuls of fourths, peppered with groups of skipping phrases that would end with a quick dash up the keyboard. Bass and drums chased him all the way – although occasionally Waples playing knocked the balance askew. Majkowski’s bass solo started with long repetitive phrases that grew into a beautifully crafted effort. There was an almost architectural quality about it, with lots of interesting features to give it internal colour. The piece wound out with the main melody. Definitely Sondheim !!

Jacam Manrick’s Gangbusting produced an opening alto line that sounded like a jaunty, slightly drunk bossa. But it turned into a feisty 7/4, which the group held together meticulously throughout the piece. No small miracle was happening here, because there were lots of chord changes, and with the on-stage lighting almost non-existent, reading the charts must have been a nightmare. Hippo needs to get its act together in this respect. Nock’s solo hit the spot again. Bass and drums tucked in behind every move. Their rapport is almost spooky. Waples drum solo was very disciplined, keeping the pervasive 7/4 pattern in the foreground, and fed beautifully back into the close.

The penultimate tune was Mike Nock’s Essence. Delicious in every way – basically a steady jazz waltz, but with a punctuated melody that gave it a very attractive quirkiness – Nock caressed the work into life ready for Manricks to adorn with his alto. Manricks always conveys the impression that he knows exactly where he’s heading and what he wants to achieve, but there’s absolutely no loss of spontaneity in the feel. He is clearly a highly skilled musician. His Doctor of Musical Arts, and an impressive record of composition, suggests that his knowledge is deep. His playing, his fellow musicians and his audiences are the fortunate beneficiaries. Nock returned to deliver another solo that was almost rhapsodic at times, with Majkowski and Waples keeping the faith as ever.

A fast swing capped off a marvelous night, with Nock’s Triflin’ providing the platform for some sizzling playing. Jacam delivered his long lines buoyed up by a rhythm section giving him everything he could possibly have asked for. He was like a surfer in the zone , riding a long, slow-breaking wave that went all the way to shore. Majkowski had his final chance to strut his stuff, and he did it with aplomb – and with Waples right there with him. Nock played his solo like a mischievous child who refuses to go to bed and keeps running back to the dinner party, sneaking away, then returning with glee to liven things up. Waples provided a powerful solo, but one which was neat and compact. The final round was a sparkling affair – spoiled marginally by an unnecessarily excessive exit. But hey, where there is no extravagance there is no love.

Nock is an eminence grise of downunder jazz and we should all feel blessed by his presence. His comrades on the bandstand are all his former students. Nock admires Manricks both for his musicianship and his professional zeal, and the respect is reciprocated, and Nock is thinking of putting another band together especially to tour with his young US-based protégé. Watch this space.