Lesson from the teachers (JG2)

The James Greening Quartet was a quiz (apparently that’s the collective noun) of teachers from the Jazz School. Faculty band performances are always competent, but but this show was more than average - it worked a treat. Perhaps due to the long-term interactions of two pairs of musicians. Perhaps just the performance space and the tunes or the friendly and jokey atmosphere from James’ chatting. Whatever, it was a great night. 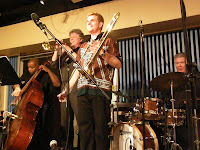 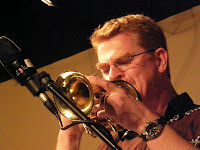 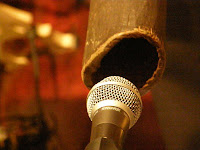 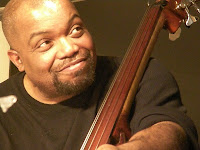 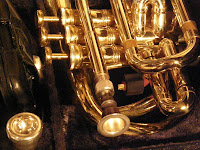 James Greening (trombone, pocket trumpet, didjerdoo) visits the Jazz School on Mondays to teach trombone players. He has a long history (20+ years?) of playing with Miroslav Bukovsky (trumpet, melodica) in Wanderlust and other outfits. The interplay is obvious and pleasing, with solos passed back and forth, and some lovely counterpoint from each of the players. They are clearly good listeners and Miro highlighted this as a key for the night. Certainly it wasn’t extended rehearsals, because James, Eric and Col were still checking out charts as I arrived. Eric Ajaye (bass) and Col Hoorweg (drums) have a parallel history of playing together, although of only 7 years duration. So this was a merging of two pairs of players (rhythm section and front line) where each pair had longevity.

The tunes ranged widely. There were two tunes by Ornette Coleman: When will the blues leave? and Birdfood. There seems to be much interest in Ornette recently. It’s not surprising given it’s so intellectually pleasing and solidly blues-based. Ornette has recently won a Pulitzer prize, so perhaps there’s some retrospective happening. Otherwise, there was a world of styles: African (Dedication to the Lion of Zimbabwe), latin, calypso, a rollicking but gentle tune by Don Cherry (Roland Alphonso), electronic drums from Col, and an original blues by one of James’ students: An Afro red, by Matt Sykes.

James played with great lyrical ability. He’s strongly diatonic, but convincingly and interestingly so. His intonation is also superbly accurate and clearly stated over the full range of the instrument. On pocket trumpet, he’s also capable (even with a water glass for a mute); more atonal but less flamboyant. I particularly loved some counterpoint with Miro which was simple but so apt, and also some collective soloing in the trad vein on Matt Syke’s tune. Miro’s trumpet was tempered and fairly quiet (his bop is far louder!) and always expressive of the tune: an example of that clear listening mentioned above. He also played melodica on the Don Cherry tune: his “chromatic breathalyser”, according to James. The melodica sound is none too rich, but it worked and especially provided some nice harmonised melody. Apparently melodica was also played on the Don Cherry original. Eric was blowing a storm. He was on acoustic on the night. There was huge subtlety in his right hand as he formed soft notes with virtually no attack. There was hard swing at times, and richly embellished rhythm at others. He often reminds me of Buster Williams, with low action, slides, growls and the like. A master at work. Col held his end up with unadorned rhythms, but providing wonderful changing backdrops over time against each tune. It’s a deceptively simple technique, but very satisfying. Also, hand work on the drums, and a huge range of electronic sounds against didjerdoo in the tune, Hypnotic. James quipped of the electronics as “Col’s stuff”. They were very nice, if electronically simple, sounds, and added a twist to the (otherwise staid) jazz tonal palette.

James is renowned for his presence on the Today Show (!!!) and Playschool (!!!!!!) not to mention Wanderlust, catholics, 10 Part Invention, Bernie McGann and the rest, so we could expect no less a show than this. A great night of playing with considerable mirth. ArtSound were there so expect to hear snippets on the radio over coming months.