From Puccini to Rheinhardt, Italy to New Orleans, Monsieur Camembert's arrangements are free flowing and how the leader keeps it all in check is anyone's guess. Each song forms a narrative but leaves space for improvisation, allowing each voice to speak. 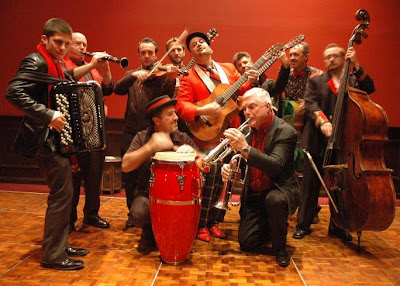 Pic borrowed from the band's webpage

The audience was unusually quiet during the first set. At first the band seemed to wonder why they weren't responding or dancing, for this music infuses the body and gives elan to the soul, causing it to dance in the eternal embrace of the bacchanal.

Only after the second set, when bellydancers Gypsy Noir and the Canberra Dance School whirled like dervishes by the stage did the ambience heat up. Rita Markwell, Min Mae and Fiona MacPherson impressed the some band members sufficiently to perhaps hint at future events in a similar burlesque vein.

The group's tone palette varies. Silveresque piano runs converse with eastern European guitar lines. Mark Harris steals the show with his brilliant parodying in tenor. Matt Ottingnon on sax puntuated the air, and swapped to flautish whispers and musings on the clarinet. He is proficient on an array of wind instruments, and was surrounded onstage like a footsoldier with advanced weaponry.

The blend of culture in Monsieur Camembert bestows on this music a refreshing vitality and universal appeal. My only groan is with the Southern Cross Club's reticent attitude to standing capacity. But ultimately the club is to be commended for sourcing fine gigs. Mike Nock was a similar success for them. The venue's acoustics are excellent and the lighting and stage setup is fine. I look forward to more great performances here.