The last White Eagle offered another night of fabulous, but fascinatingly different performers. It’s almost de rigeur that the two sets are markedly different, and this night was perhaps the most extreme in this respect. The first set was the harmolodic. 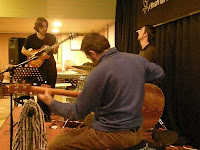 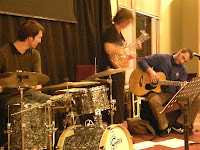 Legedis Benz’s set featured a triptych of Ornette Coleman tunes (Peace warriors, WRN and a very stylised blues, Feet music), a Roscoe Mitchell number (Noonah), Zappa quotes and originals by all members. Needless to say, this was the challenging end of the spectrum. There were fast and furious unison lines throughout, and harmolodic invention abounding. Harmolodics? It’s the concept that underscores Ornette Coleman’s music. It’s somewhere east of free. We had a chat about it after the gig. Apparently it’s none too clear with anyone, but it seems to demand all players to perform as improvisers and to clear themselves from support roles, and for their melodic inventions to be free of limits of conventional harmony, melody and rhythm. Suffice to say, after furious intro melodies with rapidly changing keys and pretty indistinct tonal centres, the players perform free with no underlying key or even tonal centre. Challenging all round, but hugely satisfying (if done well). 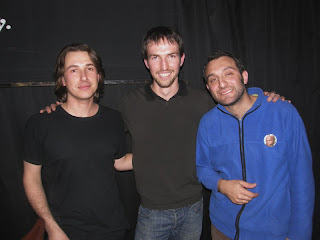 LB comprises Jarrah Jones (guitar), Sam Young (drums) and Simon Milman (bass). Jarrah played like I’ve never seen him before: dischordant chords, sharp phrases, sustained atonal lines, bent notes and vibratoed chords, odd intervals, scraping strings. All short, sharp sounds. Oddly, I caught a snatch of the guitar tone from the Coupling theme at one stage. Sam was tight and played with a drum tone to die for. Perversely, he could be stunningly simple and clearly expressed, with solos that often dropped back to straight, sustained grooves, like an eye in the storm. Simon was unorthodox even in his choice of instrument: an amplified acoustic bass guitar. It imparted such a different tone, and surprisingly apt for this outing: acoustic, not rich, deep and woody like a double bass, but fatter, more middly, but still clearly acoustic. Interesting. Playing wise, Simon ran with the others, harmonically adventurous, freely moving over the fingerboard, sometimes playing with thumb and fingers in a softer slap style, but otherwise fingerstyle. Simon also introduced the music. There was a constant theme of nicer or nastier (which was even carried on in references later by Matt Baker later in the night). You couldn’t say any was “nice” in the sense of a beautiful ballad, but this was not the intention. This was extreme sport for musos and they carried if off fabulously. But I’m wondering where we’re likely to hear them again, given the demise of WE. Perhaps Moruya? 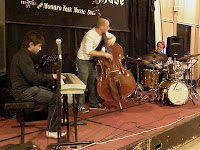 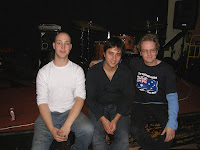 The Matt Baker Trio was literally the symphonic end of the night. The trio was Matt Baker (piano), Karl Dunnicliff (bass) and Dave Goodman (drums). Matt’s recently returned from Europe and his comments and compositions harked back to Switzerland. His latest album, “From an afternoon in the mountains”, has tunes like Les Dentes du Midi and Le Tour d’Epee as dedications to towns and mountains in this picture-card-perfect country. As for symphonic, there was talk of recording with a chamber orchestra, and a surprisingly successful performance of the main theme from the first movement of Rachmaninov’s second piano concerto. Matt talked of trying to record jazz in a classical style, but then performed classics in a jazz style. I was intrigued by the similarity of these harmonic movements to those of jazz. (Perhaps this was just his interpretation). There were some classical piano playing that jarred with my jazz sensibilities, but I found the piece surprisingly satisfying. This was a crossover that worked. Continuing the lyrical side of the night, there was even a beautiful composed piece with no improvisation. Otherwise, this was very competent, mainstream-modern jazz with hints Bill Evans and the like. Syncopations, close interactions, convincing rhythms and rolling solos. Matt played lots big sounds. I noticed plenty of block chords and patterned solos. Karl played great bass accompaniment; always rhythmically strong with a rich and clear tone. I particularly loved Dave’s drums on this outing. It was standard mainstream style-wise, but it displayed perfectly timed triplet feels, beautiful rimshot work, and more, and was generally a pure and accurate performance in the style. As an aside, Dave was telling me he’s studying for a PhD in jazz. Dr Goodman … very cool. A jazz PhD … would this be a first in Australia? I wondered if you could achieve a PhD in performance. His is not performance, but deals with changes in drum styles over the modern jazz era. So the night finished was a very satisfying but very different performance. 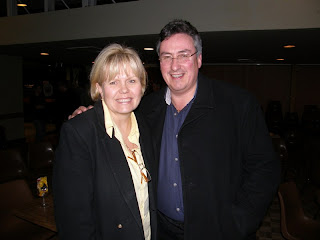 Thanks to both the excellent bands for this last evening at the White Eagle. Vale! White Eagle.