Round (a very long) midnight 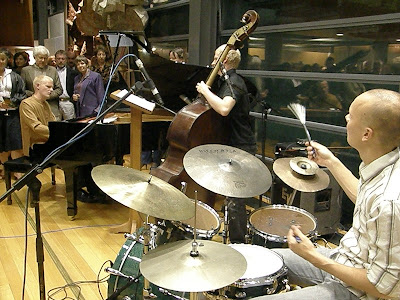 The nights are long in Finland (latitude 64deg N), and I reckon that’s an influence on the style of music we heard from the Joona Toivanen Trio. I caught them at the Finnish Embassy where they performed one set for over 200 guests. They also played a longer performance at the Southern Cross Club the following night. But the embassy gig was pleasant and musically satisfying. The room was architecturally modern: a large space with glass and sculptures and the suspended shapes of mezzanine rooms. There was champagne and hors d’oevres, and the oysters were the best I’ve ever had at a jazz gig! A genuine diplomatic cocktail gig. 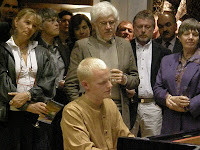 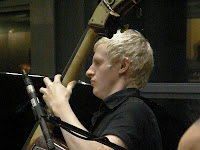 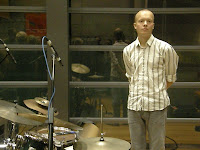 The music was rather more austere than the cocktail party. It made me think of the long nights, and how sombre things can get for musos at the end of a long night: Monk’s “Round midnight” effect. There was some hard swing, but mostly the music was more ECM, more impressionist. I heard early-20th century classical piano styles and the influences of European folk traditions, lots of cymbals and brushes, carefully constructed bass, ascending scalar flourishes that woudn’t be out of place in a classical repertoire. Lots of intent and serious expressions. I joked to a mate that “drummers have more fun”. The bass and piano brothers smiled after playing, but there was real seriousness evident on faces during the gig, whereas the drummer had a smilier face. It was beautiful, original music and well played but so different from our scene. My presumption is that there’s plenty of jazz like this on the European stage. Jan Garbarek and ECM are my evidence. It’s not the engaged swing tradition more evident in the US and perhaps in Australia (remember Ellington: “it don’t mean a thing, if it ain’t got that swing”). Not that this seriousness is bad, just different. As for performances in embassies, good on the Finns. I imagine our Australian embassies would more be likely to play Men at Work than Paul Grabowski, although PG does get arts funding to tour internationally.

The trio was Joona Toivanen (piano), his brother Tapani Toivanen (bass), and Olavi Louhivuori (drums). The Yamaha grand was impressive, but the band had to use borrowed bass amp and drums set. But the sound was clear, despite the glassed walls. There were plenty of people standing and bunched around the players. Perhaps tiring but it was involving. I liked that aspect.

Chris Deacon of ArtSound was recording. He’s a devotee of this style, so expect to hear this outing on radio over time. Apparently, snippets from one of Chris’ earlier recordings of the trio are on their website.