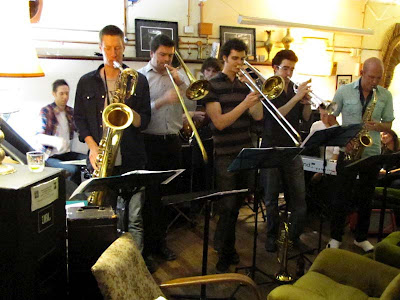 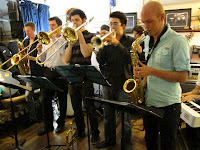 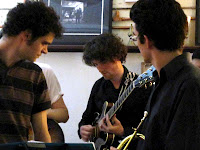 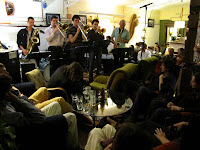 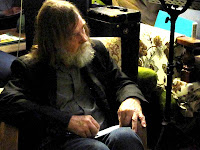 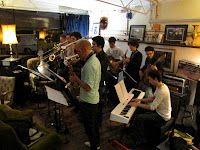 John reappeared with the band he got together to perform his compositions for his recent Recital at the Jazz School. They had performed for the recital, and presented one ArtSound Friday Night Live (which I sadly missed), and this was their one gig. But what an gig! I always love the complexity of interwoven written horn lines. Here, the bell-like clarity of two trombones and trumpet/flugelhorn rang through, with Jo Lloyd’s impassioned alto fills. Wonderful, goodebumps material, this. Then time for solos all round. I noticed the diverse guitar styles, at least in solos: Andy’s rapid lines; Matt’s minimalist explorations. Raf especially commented on their accompaniment; I missed most behind the horns but noticed some single note counterpoint that was fascinating. Raf was involved and entertaining as he inevitably is, with slap and solos on his Yamaha. Grey did another minimal but melodic solo, accompanied by unison voice. Jo always excites, and was no less here, sounding increasingly professional in style and comprehension. Rob’s solo was melodic and rich; Valdis’ was more simple but strong and emphatic. Bari always reminds me of Mingus bands, and I enjoyed Tom’s solo. John was leading so more out front, the smiling leader, again more outspoken in this context than in the Boys. They played a version of Freddie Freeloader, but otherwise it was originals with lush front line harmonies ringing with the clarity of brass over a range of changing rhythms and grooves – funk, rock, jazz, 12/8, 6/4, well varied. There was some intonation that wasn’t perfect, but this is not a regularly performing band and the music is not trivial or constant. But it was was vibrant, alive, informed music. Truly impressive stuff.