It’s a pleasure when the old guard returns. Last night it was Michael Coggins at Trinity. Michael’s a guitarist, ex-Jazz School and now in Sydney. He led a trio with Simon Milman and Mark Sutton. The set started with what seemed like original, mostly groove-based tunes with moderately complex overlying melodies, although later he was playing some standards charts. I noticed from the start a comfortable and confident style, mixing unhurried melodies with chordal fills, all at ease and unpressured. The structures were simple, at least for the groove tunes, but they came with interesting melodies overlaid. He felt eminently unfussed in playing them, displaying a competence that I enjoyed. Mostly it was a clean and unaffected standard jazz tone that he used, but there was also a descent into a rocky, overdriven sound and playing to match, and this was lively and well received. 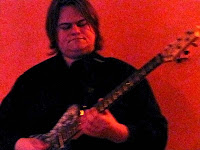 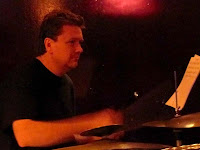 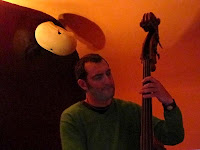 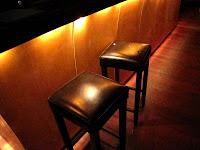 The band worked well, too, and I’m sure this was related to Michael’s composed leadership. The easy going and quiet starts left lots of room to grow the volume and intensity, which was another benefit of such a composed approach. Simon fitted the bill with steady and reliable bass accompaniment. I noticed this especially on a tune that I counted as 10/4, where he held the line mostly unchanged. This can be easier said than done, and is often lauded by sidekicks if less so by less-informed listeners. The bass player’s role can be thus. His solos were interesting. I heard them as modal explorations, modifying 8th note lines by starting from different notes of the scale. Again, controlled but exploratory. Mark was more outspoken, and I felt the drumming was amongst the most memorable I’ve heard from him. The bass/guitar ostinato and grooves obviously suited and he played with precision and constant innovation: rolls collapsing into skins, rhythms cutting across grooves, accents constantly shifting and colours moving, and a unity that was clear over the solo. Great solos that had me in awe, and were obviously well received by the audience.