It must be Christmas 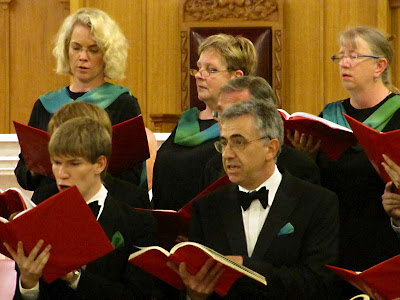 Sally observed it wasn’t jazz, but Handel’s Messiah well deserves a post on CJ. The Canberra Choral Society performed it again this year at St Christopher’s Cathedral, the cream brick Catholic cathedral at Manuka. We went to the first of two performances and it was an immensely satisfying experience. The Cathedral is not my favourite building around town, the acoustics were heavy with reverb that made for a loud but somewhat mushy sound and there was frequent traffic noise and Harley splutter outside on Canberra Avenue, but nonetheless this was a treat. It was the long performance with the full 3 Acts, verging on 3 hours with the interval. I thought this was a daring choice and all praise is due. This was my first Messiah (a late starter) but I was glad to hear one where the three parts, dealing with the Birth, Passion and Aftermath, were present, and the familiar arias and the exultant Hallelujah Chorus were in their right places. It was long but the time passed like a breeze. I was impressed by the stamina of both performance and audience. Pews are not the most comfy places to spend three hours, and I noticed the audience stirring but it was uncomplaining and stood for the famed Hallelujah Chorus, as people apparently have since King George 2. I expected that we would be too casual for that these days, but no. It was a pleasant surprise. And the applause was deafening at the end, so the effort was much appreciated. 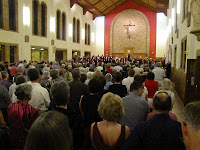 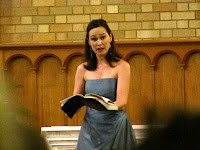 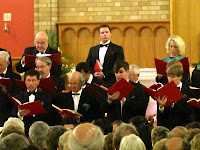 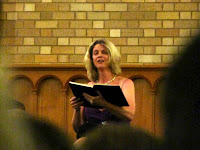 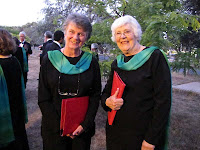 It was a small orchestra with a light presence that was sometimes overshadowed when the voices took flight. But it had a lovely courtly baroque tone that benefited from the reverb. Clear, fat trumpet ringing through (beautifully resonant and very different from a jazz trumpet tone), bassoon or oboe evident at other times, the strings fairly restrained with 7 violins, 2 violas, 2 cellos and a double bass. Organ and a harpsichord that presumably played the original basso continuo part. The choir was 21 sopranos, 30 altos, 10 tenors, 14 basses and there were arias and recitatives for SATB - Rebecca Collins (soprano), Christina Wilson (mezzosoprano), Christopher Saunders (tenor) and Stephen Barnett (bass) - and the whole was directed and conducted by Peter Pocock.

What glorious, exultant, dignified, elegant, rational music it is! Lines echoed by passing between voices and on to instruments; big and joyous interval jumps, and shapely lines. Apparently Handel is famous for word-painting where the melody mimics the meaning of the lyrics, so lines rise to mountains and fall to valleys, and “crooked” alternates crookedly between B and C#. I heard a unison bass and bassoon line that surprised and amused me. But always the neat cadences to confirm dignity at the end of scenes. I enjoyed it immensely, and the final applause was long and enthusiastic, seemingly beyond the expectations by the performers. In the end, I felt the words were strangely other-worldly (no-one much chats about exalted valleys, easy yokes or feeding flocks these days or even walking in darkness) but the rational baroque music fits well enough with modern rationality in architecture and politics and economics. We left with high spirits and much joy to take on the Christmas season. Truly a fabulous outing, so thanks in spades to my neighbour Trish and the rest of the performers. BTW, ArtSound were recording the Saturday night performance, so keep you ears tuned for the replay.
Posted by Eric Pozza at 12:12 pm

This was a beautiful concert and I was so impressed by the beautiful singing. The audience was clearly moved and the 'Halelujah' chorus was certainly rousing. The tenor, Christopher Saunders sang with great control and authority. I have not heard a tenor like him for many years. Bravi to the CCS. I only wish the conductor had more passion and understanding of the recits. Apart from that it was a hugely uplifting experience.

Anon, Thanks for the comments. No quibbles about the tenor. I took note too, but forgot to mention in the report. Strong without excess and nicely even over the range. A memorable evening. Eric

Four of us went to the Saturday concert - as I too had a friend in the choir. We thoroughly enjoyed it (and it was nice, given its earlier hour) to wander out into the Manuka evening for dinner. I thought the choral work was wonderful, but the Mezzo seemed a little weak. Is this because she was singing what was described in the program as an Alto part? Or was it to do with the acoustics and her particular voice? Nonetheless, my second Messiah was great and I hope I won't leave as big a gap between it and my third!

This was indeed a lovely evening and the audience certainly took Mr. Handel's music to their hearts. The sound from the choir, soloists and orchestra was beautiful with the acoustic from the church and it was a real pleasure to hear this music done with such passion. Bring back Christopher Saunders! WOW!