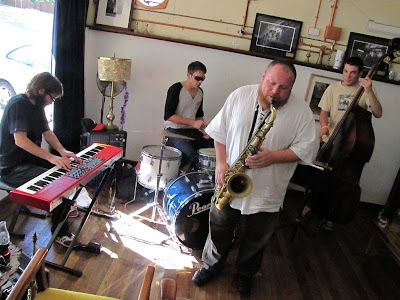 Robot Sex Dolls came to Earth at the Front on Sunday. I didn’t know of the band, but a mention of “influences of 70s Miles, electronica and the conceptual improvisation approaches of Ornette Coleman and Cecil Taylor” had me hot under the collar. So I did some research, and it was illuminating, although not just about the band itself. That’s a digression for late night and a few drinks (and it’s further evidence that the Japanese love gadgets) so back to the Front. 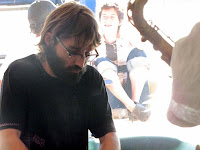 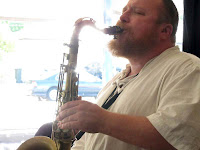 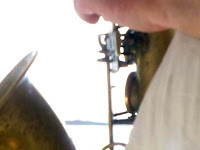 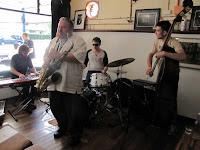 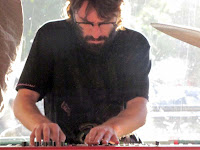 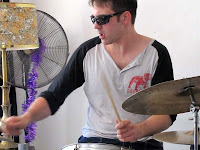 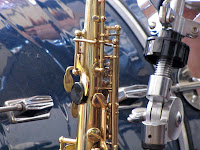 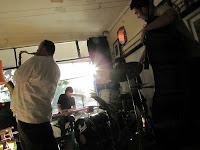 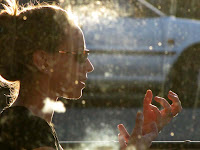 RSD is a trio of sax, keyboards and drums that is often supplemented with bass. On their CD, it’s Cameron Undy. At the Front, it was our local Chris Pound. They are from Adelaide and the product of a lengthy residency with an invitation to be challenging. And they certainly are challenging in some of the more out tunes and especially with the runner that finished the gig with ecstatic cacophony. But there’s also a strong groove component with jazz-rock and dub and reggae feels. The charts were mostly one liners, and the all-important grooves were often set with a piano left hand before being taken over by bassist Chris P who was new to the music. The melodies were sometimes simple, sometimes recurrent, and merged into soaring soprano and tenor plays from Chris S that twisted freely and satisfyingly through alternative harmonies. Richard’s keys were big, busy, other-wordly adventures. A local keyboard mate heard Rhodes and Wurlitzer tones but admitted to not picking up on all the effects from the Nord keyboard. He suggested flanger, and there was definitely tremolo and perhaps a ring modulator and I guess other delay-based effects. But it was his playing that was really extreme, with hands flailing over the keys and, on the other hand, an organ-like approach that hinted of sustained (organ) rather than percussive (piano) sounds. So when I heard organ it was not unexpected because Richard often plays Hammond.

The soloing was wonderfully out and challenging, but (as a rhythm section player, I can say this) there’s no band without the groove, and I loved the combination of drums and bass. Gilli would set a groove and hold with rock-like precision, looking around with sunnies and drummer-cool. At one stage, I realised the band was essentially playing rock music, but as it should be played: with solidity and strength and with well-chosen fills and contrasting rhythms as only a trained player can do. In the context, Chris P was a wonder. He was just sitting in, but his playing was strong and apt and easily deserving of the recognition he was getting from the band: syncopating with complexity and inventiveness through grooves and solos with a delicious bassy thud. It was a stunningly capable performance. Looking back and over the ecstasy and soaring solos, I think variety. The reggae and dub and rock and jazz-rock were there (one tune successfully channelled Bitches Brew-era Miles) but also a few ballads, with their more involved melodies and restrained soloing. One was written for the Bali bombings: Richard knows the father of one lost son. Another was written for a lost love, and looking out the window, seeing a young bloke performing on a skateboard, I thought of human males as the performers as females sit and chat. Interesting, but another diversion … as were the (pant, pant) Japanese gadgets.

This was powerful music with no room for slackers but with a sense of enjoyment and ecstasy. Involved and complex and heads-down music that was sometimes harsh but with a positive, humane feel. Just confirmed when you saw Chris S frequently smiling at the strength of the groove or the ebullience of the solos. Catch them if you can.