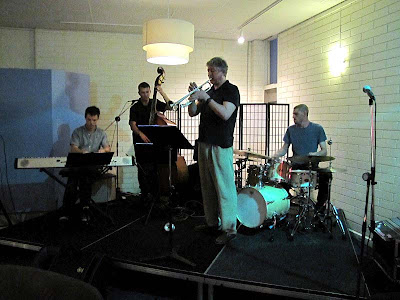 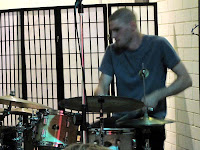 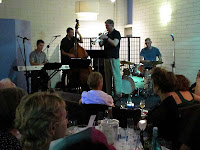 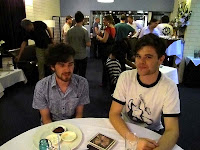 Miroslav Bukovsky and his quartet played the Bruschetta Café on Thursday night. This is a sublime band: the most subtle and virtuosic of the recent students with the mature master and new compositions all round. From the first tune, I thought story-telling. The musical structure was not complex, but the playing was exquisite and pensive. I thought Film Noir with dark alleys and the unkempt, self-damning detective. Think Charlie Haden and Quartet West: purposeful and restrained, precise but with humanity and humility. This was deep, demanding, concert material. The attention level was pretty good in the space, but it was also a restaurant and some people were presumably there for other purposes. Fair enough, and their chatting was mostly curbed by the attention lavished by others in attendance or by one or other of the stunning solos. And the solos were fabulous. Ed positively overwhelmed the space as he developed from the lightest of taps to the most intense of percussive extravagance. Miro dropped eminently tuneful little turns of phrase or descended into long and sharp scalar runs that weaved though dissonances and ended at unexpected places. Luke was muscular in volume for his jaggedy lines, richly extended chords and mobile dissonances. Bill was the great listener, waiting for the muse and then explosive with fast runs, always with honey smooth tonality and long sustain and accurate intonation. No-one standing on anyone’s toes; no interruptions; close listening and huge dynamics. Miro has obvious influences from Miles so no surprise when I heard suggestions of Sketches of Spain in some passages. And I thought later Miles while listening to Luke’s piano a times, but he’s broader in conception than just this one style. To me, this was chamber jazz, meaning intimate and perfect for this audience, but not the French polished form that people often use this term for (here I think MJQ). This had depth of soul and passion, despite the perfection of the presentation and the clarity of intention. This band has recently toured interstate and we may get a CD out of them at some stage. Good, because they are excellent ambassadors. This really is music at the highest level of the local scene, and we are blessed to be able to hear them, and doubly so in such intimate surroundings. Excellent, profound music, and thanks.

BTW, the Bruschetta Café is a new University of Canberra venue which seems to have good support from the University. It promises to stage some prominent acts in a nice concert environment over the coming year. UCAN does lots of interesting musical things: community choirs and orchestras and the like. And the price, at least for Miro last night and for Eric Ajaye’s Vertical a month or so ago, was unbeatable: free. Well worth your support, and perhaps a pre-concert dinner.