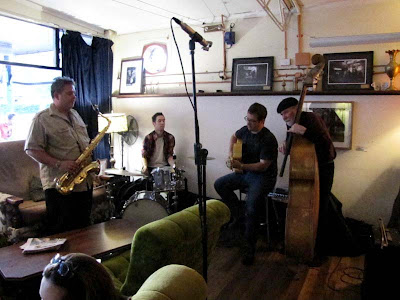 The Front is a strange and unique place. It’s the centre of a little artistic and bohemian-cum-indie community that’s quite unusual in modern Australia, at least given the places I inhabit or am aware of. There’s music of all sorts, ages of all sorts, costumes of all sorts, arts and theatre and cabaret. There’s a constant chatter, there are sketchers and drinkers and listeners. You feel you are part of the show at the Front, and it’s exciting and friendly. Last night’s show was a double header and a great night out. Just two sets, but varied and new. 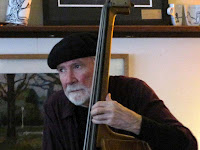 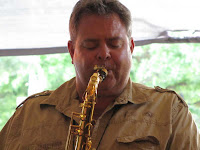 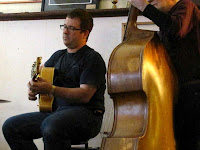 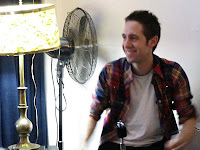 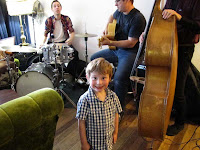 Gerry and the Boys opened for the first set. Garry is Gerry Gardiner, one time bassist for Johnny O’Keefe’s DeeJays and a stalwart of early Canberra jazz clubs. And his history was evident in his playing: a nice awareness of blues and standards lines, with fitting chromatics and a sense of dynamics. His bass also had stories: an old Boosey & Hawkes from the 1940s, blond, ply, ex-Army band, that he’s found with shards of glass poking through one hole in the back, and a broken neck. But it played OK. The Boys were Dirk, Graham and John of As Famous as the Moon, a sweet, melodious outfit that does standards like a dream when in flight. They played Blues, My little suede shoes, Well you needn’t, Softly. Standard stuff, but some laid back walks and lovely, capable solos.

I've just returned home from 2 weeks in St Vincents hospital in Darlinghurst where I met Gerry Gardiner.
Unfortunately Gerry was recuperating from a hip replacement after a fall. There were four of us blokes suffering from various fractures. Gerry, Rod, Ho and myself. All in severe pain, but having Gerry for company made the suffering fade into oblivion. Gerry's stories of his musical career were more than interesting, especially for me, a fellow musician. I'm glad I met Gerry, he's a genuinely nice guy he helped me through a difficult time.