Out of the studio

Reuben Lewis and his Quintet performed two sets at the Front the other night, supported by the Andy Campbell Quartet. It wasn’t the busiest night, but it was very satisfying, showcasing the different styles of original music composed by Reuben and Andy. 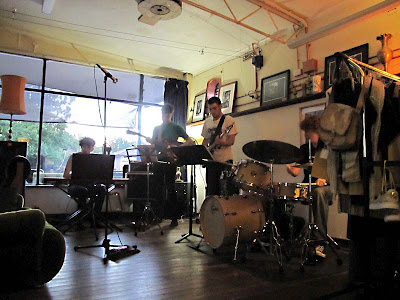 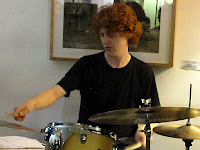 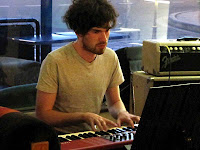 Andy played first. They played one set of five tunes of richly changing time signatures that obviously demanded careful counting and care with the charts. Other Andy confirmed that it wasn’t an easy read, and the band wasn’t overly practised so it was a challenge. But they are competent players and the performance was satisfying. These were good solid and loud rock-influenced feels, with solid, hard-hitting drums from Aidan and that characteristic rich syncopation on electric bass by Chris. I guess that the melodies were composed first and that they defined the time signatures and chords rather than the other way around. I expect that’s how ballads are written, and it’s probably how you end up with tunes like Andy’s that count 5/4, 6/4 and 4/4 all in the same chart. I enjoyed both the Andies when they soloed. A year or more back, I heard Andy C as a bit jagged and disconnected in some of his solos, but now he’s developed this into clever twists of phrasing that deliver pleasantly unexpected lines. Andy B has a different approach, as would a pianist: sometimes chordal; sometimes harmonically substituted; often a different use of intervals. I especially liked his playing with sequences that he would repeat in different keys and pitches. I caught the titles for the last two tunes, and that evoked some interest for me. The penultimate was called “Pool party” and was written for one, but it was a particularly cool event. I heard it more as a laid back easy-going tryst rather than a lively, splashy affair, and I guess that’s what that pool party was like. The last was Belco, obviously from Belconnen, the area that Andy apparently grew up in. This was gentle and hinted of lullaby, or even of Hawaii and Arthur Lyman (perhaps from the heavy tremolo on the guitar). It wasn’t a Belco that I recognise, but then I’ve never lived there. But that’s of no importance, and I enjoyed the set. 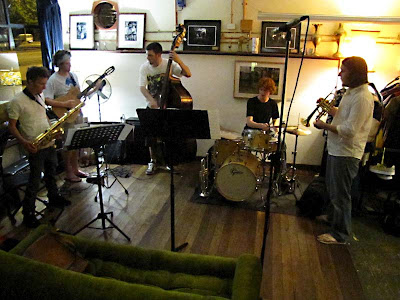 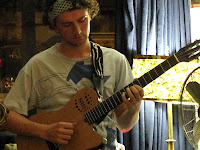 Reuben played second. The band has spent time over recent weeks preparing then tracking a CD which they plan to mix and master over coming weeks and release in February. So we could expect a well rehearsed and settled band, and we got it. I really liked these two sets from the first sounds of front line horn harmonies: Reuben on cornet and Max on tenor. For this band, the times were more settled and the melodies more classically clear. After the first set, I chatted with students who identified the style with European jazz, but I heard post-bop moving to cool from the fifties and some well informed mature jazz-following mates agreed. I also heard hints of the crystalline but luscious nature of CTI records of the 70s and without residual schmaltz. Suffice to say, I very much enjoyed it. Steady rhythms of ska/reggae through solid swings and sambas and then to some more ambient, expressionist styles in the second set, and a fully composed short tune to finish called “Get well soon”. All steady and thoughtful stuff. Lovely interweaving or sometimes parallel harmonies up front, and even some unison lines from other combinations, like wah-ed nylon strung guitar and tenor. Well considered solos that didn’t shout speed or virtuosity, but moved you through emotions with well-picked intervals and phrasings. There were some tonalities, too, that I noticed were different: Reuben playing cornet mostly in preference to trumpet (not so harsh a tone, but retaining an edge that the flugelhorn discards in favour of mellifluousness), and Matt’s very unusual amplified nylon-strung guitar with its thumpier sound that worked well in the rhythm section with Chris’s thumpy acoustic bass. Aidan was again on drums, but this was more the jazz style, with brushes and swing times and jazz accents. We even heard a few simultaneous solos from the horns, a style that is occasionally revived by modern players. This band first played at Jazz Uncovered in April and they caught my ears then. They are more developed and settled now. The music is gentle and tuneful, and it’s played with soft, acoustic sounds. It was a great gig, and I’m looking forward to hear how Reuben and mates preserve it for posterity on CD. Very well done.