It’s a huge dose of music this week, and I’m loving it, but it’s hard to keep up. Here’s the latest: the Composition Concert from the Australian Youth Orchestra National Music Camp. This was a bit different from the others. Here, the performers are mainly tutors, and the compositions are the student efforts. There were four compositions. The story is the pieces were 85% written before the camp, with the final touches added following hearing the works in rehearsal during the camp. The rules were that they initially write for unpitched percussion then compose from that (rhythm is the theme for this music camp). The composers seemed to be a bit challenged by this, given their comments. The tutor said that composers usually start from pitch (melody or harmony) and the rhythm is a complement, so this turned things around. But the tunes were very interesting, reasonably diverse and eminently contemporary. And interestingly, three of the composers were graduates of the Sydney Conservatorium: I wonder who teachers composition there. 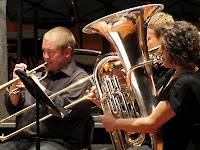 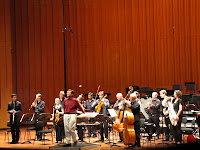 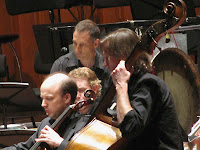 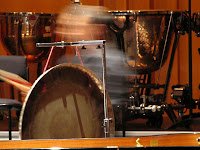 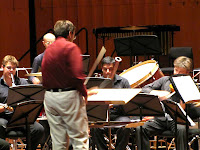 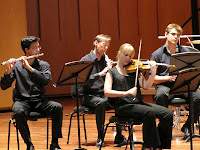 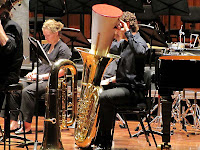 The first was A frost-making stillness by Chris Williams. This was written in response to a line from a Ted Hughes poem, but the words didn’t appear, so presumably it’s an emotional response to the words. The work played with timbres and developed rhythms in the changes of timbres and dynamics. Various sounds merging in and out; sliding, squeaking tones, bongos; swells that came and went in a few beats; some hint of a tonal centre, and presumably a time signature (given the movements of the conductor) but none too obvious. The next was Patterns II: Matryoshka by Peggy Polias. The Matryoshka are the nested Russian (we call them Babuschka=Grandmother) dolls that we buy on holidays . (You can buy them with ARL and AFL team colours in Prague tourist shops. Stranger than fiction, but I’ve seen them). Interestingly, Peggy is the copyist for Elena Katz-Chernin and Peter Sculthorpe, which must be a dream job for a student of composition. This piece involved revealing multiple layers as in these dolls and a concern with pulse. I noted some swing here, with cowbells comfortably on 2-4, sometimes a cantering feel, and some dotted crotchet syncopations which are common in jazz melody. The third piece was Holding patterns by Timothy Tate. I guessed ¾ time from the conductor’s baton, but again it wasn’t obvious. This was all timbre and drama and drum brushes for a watery sound and melodies on violin that sounded of echos, then a totally unexpected, short, fast, rising melody to end the piece on a query. The final piece was Buy a copy (of the Big Issue) by Aristea Mellos. Aristea had heard a constant call from one Big Issue seller at Circular Quay, every day for the four years she attended the Sydney Conservatorium. This cry, its pitch and rhythm, formed the basis of this piece, and she coloured it with percussion. This piece was the most accessible, most lively, most jazzlike of the four, with calls and responses (piano – percussion) and syncopations and tuneful melodies that reminded me and friends of Gershwin and Berstein. I have to admit liked this piece best, grooving away rather than concentrating on subtly changing and complex ambient sounds. But I’m unfair. They were all worthy works, and perhaps this last was the least contemporary style of them all. Whatever, all worthy music and a fascinating outing.

To end, I’ll mention a few composers’ games that they played at the music camp. “Who’s got the best manuscript paper” is obvious enough and more indulgent than educational. Another involved each person writing a line for 3 unpitched percussion instruments, then passing this on for the next to add another bar or line. Again obvious, but clearly challenging. Composing is a masterly and seldom considered craft, and it’s good to see it’s still alive today, despite endless concerts replete with the baroque/classical/romantic masters. The other point to mention is the fabulous playing by the performing tutors. I can just imagine what the score must have looked like, and they would not be easy to read. So congratulations all round, but especially to the composers, Chris Williams, Peggy Polias, Timothy Tate and Aristea Mellos.
Posted by Eric Pozza at 12:55 pm