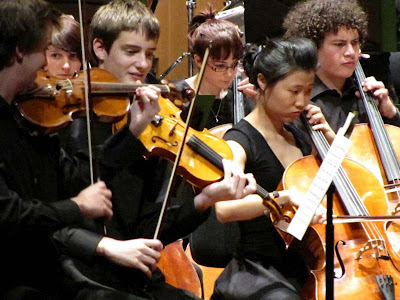 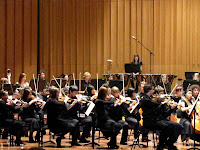 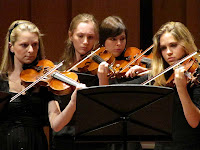 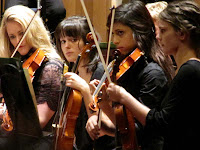 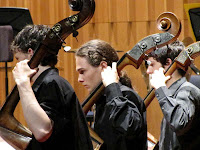 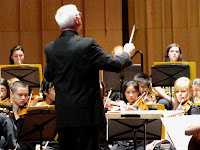 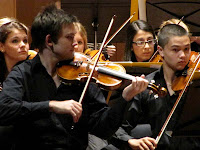 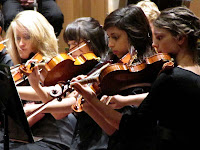 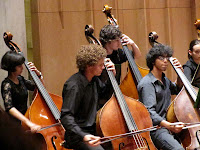 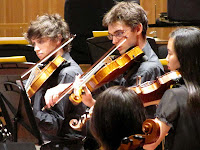 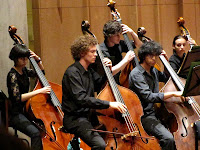 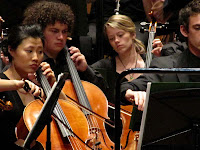 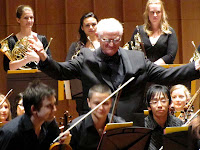 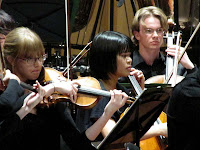 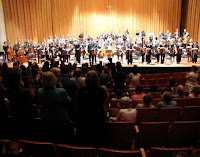 The Australian Youth Orchestra. What a way to wile away the lazy days of early January when the jazz is quiet in Canberra! Something like 300 students and tutors are in residence at the ANU for their annual National Music Camp, and we are the lucky ones who get to appreciate the music live. The rest of Australia has to listen to selected concerts on ABC FM. There is a string of concerts this year, throughout the second week of the camp. We attended the first orchestral concert so we got the big guns. Other concerts feature percussion or chamber or original compositions or brass, and there are 4 orchestral concerts on the program.

First on the program was Veni Creator Spiritus by Australian composer Ross Edwards. It’s a modern work in two movements. The first movement is a restatement of the plainchant performed for the Catholic feast of the Pentecost, and celebrating the coming to Earth of the Holy Spirit. The program notes observe that “the ethereal effect ... is enhanced by omitting the double basses”. Certainly, they had little to do here. The second movement is jubilant and energetic. Busy violas and sharp violin counterstatements; again little work for the basses. I felt it as wind and sail, but this is Australian music and spells country. The piece was played by the Tuckwell Chamber Orchestra directed by Howard Penny.

The other piece before interval required a stage reset for a much larger orchestra. I always measure the size of an orchestra by the number of double basses. There were 8 here and 7 for the other orchestra, the Alexander (for interest of the bassists reading this, five played German bows; three played French). The Bishop Orchestra was led by Lutz Koehler of the European Youth Orchestra and played Smetana’s tone poem, The Moldau. It expresses the life and flow of the Moldau River which runs through Prague, with scenes the merging of two streams, a wedding on the banks, rapids, a path through Prague, and more. I heard it as folk melodies, grand rural scenery, a dance presumably for the wedding and a triumphant ending.

The Alexander Orchestra with conductor Lawrence Renes played the final piece, Tchaikovsky’s Symphony no.4 in F minor, Op.36. The program notes talk of fate and the traumatic experience of his short marriage and divorce. This was big and powerful music. Ending the first movement, we muttered that it was clearly Russian music. There was a passion that kept escaping, only to be reined in for another round. The same excitability returned in the final movement, and I felt my insides knotted with tension and excitement. I think it was the clarinet that had a major part in the second movement, and I took note of an intriguing passage where a flute plays a sustained solo-like melody against sustained quavers from the strings (do I remember this correctly?). But the most notable aspect of the piece is the sustained pizzicato for the whole string section in the final movement. Detailed and delicate and very unexpected. And there’s an odd spot where the pizzicato lines originate in the double basses on the left (this was an unusual arrangement for an orchestra), and moved like an early stereo sound effect from left to right through first violins and cellos to second violins. The whole ended with elation, from both performers and audience. The youth players were stamping their feet, and a goodly part of the audience joined in with a standing ovation and long applause. Then an encore which divinely repeated the pizzicato segment. To me this was even better than the first statement: conductor and players were obviously relaxed and having fun; the ppps were seriously, almost inaudibly quiet, the dynamics and interplays were alive. All evidence of a youthful exuberance that was evident and openly expressed. They are clearly working hard, probably playing hard, and obviously having a great time. Keep it up.

The AYO is quite an institution, with a history of camps dating back to 1948, and a program for this year that includes an international tour with performances at venues including the National Centre for Performing Arts, Beijing, the Royal Albert Hall, London, and the Concertgebeouw, Amstrdam. Truly impressive, in performance and conception and organisation. Along with the burbling V8s and pristine, detailed engines of the Summernats, this is a Canberra summer gem. And the morning after I am still glowing and the Simandl Etudes I got for Christmas seem so much easier.