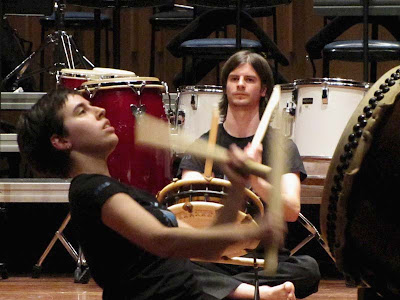 I’m taking whatever opportunity I can to hear the Australian Youth Orchestra while they’re in town. My second concert was the Percussion Ensemble and it was a hugely varied performance which was truly thrilling. I had struggled with classical percussion before and was never quite convinced, but this was different. This performance was varied and entertaining and occasionally overwhelming, and a great introduction to the art. 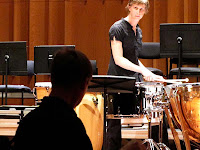 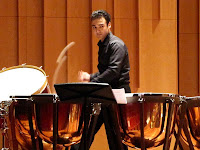 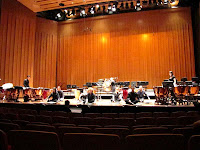 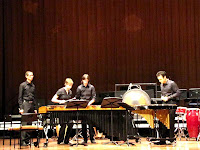 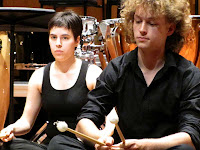 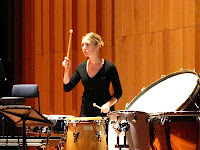 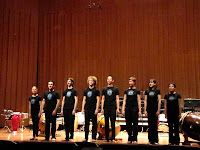 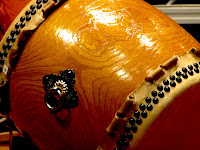 The first piece was meditative with long, ringing cymbal passages contrasting wildly with tympani and bass drum hits and features, all under discrete conductor control. It was a piece entitled Die Welle by Swiss percussionist Fritz Hauser (who I think I’ve heard in the Band Room). I found this a bit challenging to enter, especially soon after a busy day at work, but its calming and involving role was evident as the program continued.

The piece that followed was Peaux by Iannis Xenakis from his larger piece, Pleiades. Xenakis wrote more widely, but was introduced here as the “Beethoven of percussion”. From this I guess classical percussion must be a new idiom, as he only died fairly recently. Peaux was a mathematically informed, clearly structured poly-rhythmic piece that says percussion to me. I felt more comfortable with this piece than the previous one, I think because its essence is defined by rhythm and pitch rather than timbre (much more jazz-like). Six players each had stood in an island of drums for a total of 44 drums on stage. The players were widely separated and arranged in a semicircle across the Llewellyn stage, with a conductor off stage centre. The complement of drums varied slightly between players, but was very close to this: four players with bongos, one conga, two toms and a tympani; two players each had an additional mounted bass drum. All played with sticks. Imagine the complexity of pitch and rhythms that’s possible. This was loud and varied and grooved with hugely complex interplays and occasional solo-like features. Fabulous.

Piece three was Djilile by Australian Peter Sculthorpe. PS is renowned for representing the Australian experience. This piece borrows from an Aboriginal melody of the north (Kakadu?) and was commissioned by the Sydney percussion ensemble, Synergy, and premiered at the Adelaide Festival of Arts in 1990. It starts and ends in the dark with the sounds of thunder, so it’s obviously of the top-end. The core (excluding the thunder) is played by 3 musicians sharing one marimba, and a fourth on vibraphone. The core is a pretty and beguiling tune and I seem to remember an insistent bass riff or lower pitched chord pattern which spoke of popular song. I particularly enjoyed the contrasting timbre of the toneful but thuddy wooden marimba against the sustained and reverberent, metallic vibraphone.

The last piece moved further afield to Japan and its taiko drumming tradition. It was called Yataibayashi, and was a TaikOz arrangement of traditional music from a day-long festival held annually in a Japanese village for the last 350 years (I missed the details). This was performed by 8 players on three large taiko, four small taiko, and a triangle-like instrument that played a surprisingly cutting metronomic eighth-note beat throughout the performance. I noted the formality of presentation and performance, the different Japanese-style techniques including heavy mallets held in clenched fists, the repetitive rhythms, and what seemed to be a totally square (I mean notes spilt into two not three and unswinging) rhythms. And the volume and the sweat and strained muscles on the performers, of course. I guess this was new to some of these performers, but they did it well, and the audience loved it. Powerful and steady and insinuating and Japan-formal.

Such a wonderful program! Variations of styles and approaches and rhythms and tonalities. It seemed to me to be a perfect introduction to classical percussion and impeccably enticing. The Australian Youth Orchestra Percussion Ensemble comprised Robert Allan, Sophia Ang, Joel Bass, Catherine Betts, Rebecca Lloyd Jones, Brent Miller, Robert Oetomo and Anna Zeltzer and they were tutored by John Arcano, Ian Cleworth and Tim White.
Posted by Eric Pozza at 8:56 pm