It’s not every venue that can satisfy a performer when, at the sound check a few hours before the gig, he requests a Bösendorfer grand to replace the Yamaha. But this was the Band Room at the ANU School of Music, and the changeover and the associated tuning happened for the gig to go ahead on time. The fact that it was even requested is evidence of the style of the night. This is ECM Euro jazz, so honky tonk is out, as is thundering and abandoned playing. This is delicate, controlled and intelligent music, obviously influenced by the classical training and traditions that are common in European jazz players, although still clearly in the jazz idiom. Not third stream, but not torrid either. 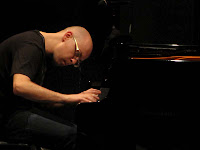 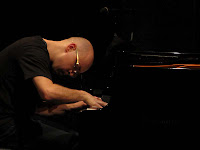 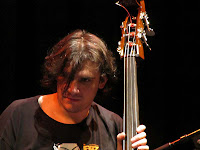 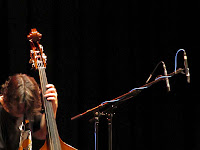 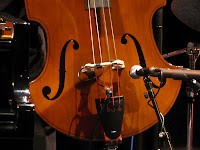 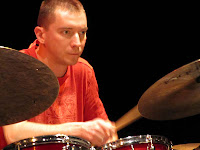 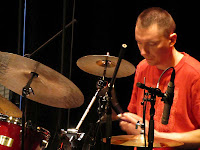 I last heard this band when they appeared as the backing trio for Thomas Stanko a few years ago at a private embassy gig here in Canberra. This time, they were touring for Sydney and Perth Festivals, and presenting their individual piano trio voice. It’s formal and considered, and despite a few pop tunes, is in the mainstream of modern European playing. I think Keith Jarrett and to a lesser extent, Dave Holland, when I hear them, and they played tunes by Keith Jarrett, offsider Gary Peacock and Carla Bley. But they also played Prince and they’ve recorded Bjork’s Hyperballad, so partaking of a current theme of reinventing the standards repertoire with a new generation of popular tunes. I like all this. And I liked the band, very much. I wasn’t the only one.

Marcin Wasilewski was richly harmonic on piano, free to move through keys and dissonances, but disciplined and tempered in his approach to the keyboard and his fine little melodic lines. I noticed later in the night, as the volume lifted and there was a bit more abandon, that he was disappearing under the drums, so he’s presumably not a loud player. He’s more a player who feels every key. Not to say there were no dynamics (there were) but they were circumscribed. Slawomir Kurkiewicz played a Czech-Ease travel bass with those soft Velvet strings for good, solid modern syncopated lines and just one walk that I noted during the night. It was close rhythmic playing with the piano, with a few very good solos, but I particularly noticed the reliable intonation. Perhaps it’s evidence of more classical training. Michal Miskiewicz was using borrowed drums, and I found some of the tom tones to be a bit woolly, but he played with consistently changing rhythms and again a closeness with the others. To me, it was this closeness that was the highlight. Rhythms that moved through the players, in contrast or in sympathy, with that underlying syncopation from the bass. It wasn’t clearly swinging, although I guess there was some swing there, but more patterns of dotted notes and straight triplets and quavers that hinted of the classical charts I only attempt to sight read. Tunes and improvisations that display a Western classically-informed conception of how to place notes in time to form melody.

The stage presence was of a type with the seriousness of the music. Marcin just once spoke to the audience to list the tunes they’d played, and this was short and I missed most of it. He spoke English well enough (trust the Europeans to be so international) but this was a serious event we were offered. It led to a quiet and subdued night: more highbrow and perhaps less enjoyable than it could have been. But the crowd was good, the venue was intimate and quiet (and well provided), the music was accomplished, and ArtSound was there to record and later replay on some Friday Night Live. So this was a wonderful performance, if quiet and absorbed. A good sign for jazz in Canberra and worthy audience to keep us on the touring circuit.

Thanks for the information, we will add this story to our blog, as we have a audience in this sector that loves reading like this”