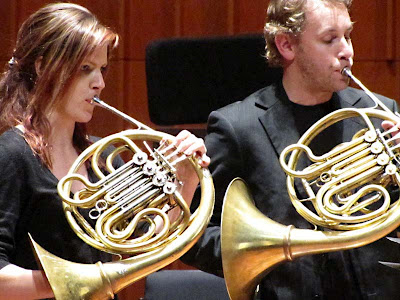 The Australian Youth Orchestra’s Brass Ensemble was my third outing for the National Music Camp. Classical brass has a bell-like clarity that we don’t really hear in the jazz idiom, and it’s delicious. The trumpets (especially the little pocket trumpet) and trombones and even the big tuba ring with clarity that carries a mile. I guess it’s fewer overtones and big, sine-wave fundamentals that do it. I’m not too clear on this, but the cornets, with their differently shaped tubes (conical rather than straight then flared) sound softer and more intimate and perhaps closer to the French Horn, which also has conical tubing. The French horns sound different again to my ears, fatter and more a belching rather than clinical sound. When together, they sound so pure and swell so excitingly that it can give me goosebumps. And there were swells and courtly sounds a-plenty at the AYO Brass concert. 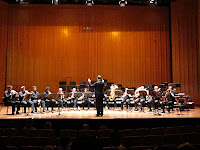 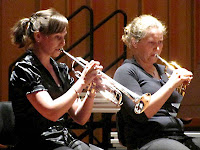 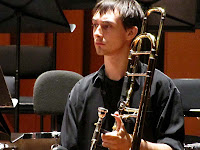 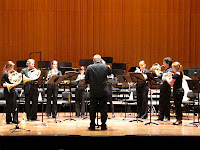 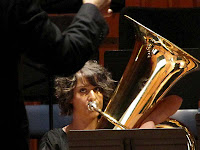 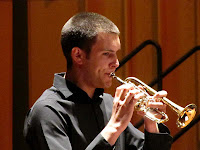 Like the Percussion concert, the brass players presented a range of styles and eras, although I didn’t feel the same sense of variation that I did with the percussion. Definitely the timbres were more consistent with the brass, but maybe also the musical conceptions. At one stage, a leader jokingly congratulated the audience for staying so long at a brass concert. It was self-flagellating, but brass can have such long periods of counting rather than playing on the symphonic stage, that I can understand the feelings. I attended with a mate who had played trombone in the Melbourne Youth Orchestra, and he commented that the pieces were only of a moderate level of difficulty, so there wasn’t quite the excitement of the virtuosic, speedy lines that classical players seem to master with ease. The ensemble sat in a semicircle with the conductor at the apex and the players moved in and out for the different pieces: trumpets to the audience’s left, through horns and tubas to trombones at the right with percussion over their shoulders.

The program started with early courtly music, Lully’s Music for the Sun King: a familiar melody and one that highlighted the bell-like beauty of the sound. Then a modern Australian arrangement of Wagner called Elsa’s procession that sounded of chromatic movements and swelling, gut-wrenching sounds. Third, a contemporary Australian piece, Siegfried fantasy by Matthew Hindson, with more dissonant harmonies and frequently changing time signatures and some repetitive rhythms and chordal movements that reminded me of jazz. Then eight French horns playing a modern piece that won a major international composition competition for horns: Stanhope’s Retreat and pumping song. This had two movements, including what seemed like a call to the hunt. Fitting for retreats or pumping, I’m sure, but not my favourite. Then back in time to JS Bach’s Passacaglia and fugue in C minor which was stately although busy with constantly changing scalar lines bouncing between instruments, and had a final cadence that sounded to my ears just like big pipe organ chords. I guess it’s those overtone structures, again. Then more big swelling chords in Grieg’s Funeral march. Grieg wrote this piece for a friend who died suddenly, and it was also played at Grieg’s funeral. The drum pattern clearly suited the funereal ambience, but some chordal and melodic movements seemed jagged and out of place and didn’t work for me: not a favourite. And a finish with another Australian arrangement of Wagner, Sigfried’s twilight, with repeating quaver pairs that apparently reference Wagner’s bi-syllabic character names. This was another exciting piece of swelling chords sounding like endless emotional resolutions and discovered sunsets.

So a capable concert with blissful clarity and swelling emotions and often dignified melodies and a fabulous intellectual encounter with Bach, but a bit short on virtuosic flings and tonal variation. Well played and very much enjoyed but I left feeling just south of elated.