I’ve been trawling different arts and musical forms recently in these pages – pop/rap for NY Eve and AYO is in town and a blow out. But from the jazz side, Steve Newcomb and Hannah Macklin were visiting Canberra from Brisbane and fit the bill. They performed for the first new year gig at Trinity as part of their CD release tour, and this was delightfully different. I knew what to expect. Steve had sent me a copy of the EP/CD, and I was enamoured with the delicacy and complexity of the voice, the worthy and absorbing lyrics and the ethereal accompaniment, and some whispy and musically demanding harmonies that were to-die-for. I’d wondered how they could present this out of the studio, with just two performers in a live situation. I shouldn’t have doubted. There was not a load of tech, but it was clever stuff. And the performers were a dream. Despite unplanned accompaniment of bar voices and laughter and occasional cocktail-shaker percussion, the duo carried off a subtle gig with aplomb and goodwill. Great show. 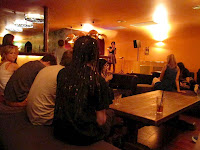 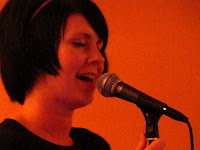 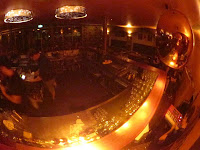 Voice and words are particularly human expressions, so it’s not surprising it’s the first thing I noted. Hannah’s is a wonderfully trained and flexible voice, slipping over wildly varying intervals with pitch and precision, each note carefully formed with musical purpose, and melodic and soloistic lines that linger or move within scales and substitutions like a horn. This is not just emotion, but a clear display of high level intellectual craft. And not just written, because you hear it in her improvised interplay with keyboards, where the pair bounces fiendish little responses back and forth, each line morphing as they chatter. And finally those divine harmonies I’d heard on the CD; they appeared towards the end of the night, as Hannah played an effects unit with her left hand, looping and layering vocal lines as harmonies that seemed not quite so complex as those on the CD (but may have been). And not just harmonies, but also looped clicks and whistles and later mic taps for a percussion intro to one tune. Human expression but hinting of electronica.

Steve was even more the electronics dabbler. Maybe he does the right hand solo thing (I think he did once last night) but he seems to me to be closer to the tune than that. I could say accompaniment, but not just that. This is interpretation where the sounds and movements of the inherent chords are explored, not just set down and played over. And not just with piano. Although he mostly used Nord and Rhodes tonalities, there was a deep organ bass that often appeared in the left hand. And then later, perhaps looped, portamento slides and robot whistles and echoey squeals and squeaks and things percussive and toylike in the right. Again, bouncing from the voice, not featuring, but closely pairing for a Bjorkian otherworldliness. In fact, they played one Bjork number, Unravel, and the style of left hand riff and ethereal, rhythmically indeterminate overlay appeared in this and a few other original tunes from their CD. They also played Wayne Shorter, Herbie Hancock and even Otis Redding with a vocal style that I found authentically bluesy-gospelly and even growly, although the vocal timbre would have been unusual at the Blues Club. But mostly the night was originals from the EP/CD. Genuinely interesting lyrics from a mobile voice with deep grooves and that ethereal overlay. All strangely open and childlike at times, and sometimes anomalous (“Buried in the closet, underneath the vacuum cleaner … lies are skeletons” or “my heart comes undone, the devil collects it with a grin, he never returns it”) despite frequent lyrics of love and emotion.

Mate Andy Campbell sat in for two tunes, but he played it appropriately restrained, so the essence of the music changed little with the addition of a few guitar solos. It was all a refreshing change, and an authentic and intriguing voice of modern Australian culture. Much, much enjoyed. Hannah Macklin (vocals) performed with Steve Newcomb (keyboards) and Andy Campbell (guitar) sat in for two tunes.
Posted by Eric Pozza at 9:26 pm