There’s been a schism in the jazz community from the days of be-bop and it lives on as schisms do. The Bebop revolution brought a new approach to jazz, with the “mouldy figs” and “reboppers” parting ways. I’ve taken one side of that barricade at times, but these days I have a renewed interest in the history of our music, so it was with anticipation that I finally got to catch Brass’ere. Brass’ere aren’t just a wonderfully amusing name. They are also brass ensemble in the style of the New Orleans street bands. They can busk; they can walk and play; they sound generous and rotund with a fat tuba bass and marching drums; and they sneek in a baritone sax as the one reed instrument. They play standards of the brass band and trad jazz repertoire. But there’s joy and fun in this band (as should be with a New Orleans brass outfit - they play swinging music at funerals, after all) so their repertoire extends to a good bit of funk and even some re-imagined pop tunes. So, this is amusing and entertaining and big and satisfying music, and it swings with fat brass harmonies and backing lines. Wonderfully involving. 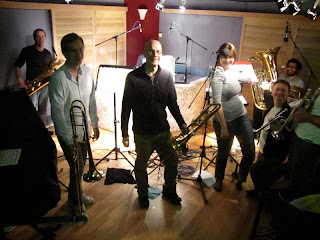 Cameron Smith leads the band, on trumpet and occasional vocals, but there’s another trumpet (Zach Rafffan) and two trombones (Josh Gosling and Michael Bailey). This is the core of the fat, swinging lines, and they do it with great rhythmic feel and dynamics and nice pitch. Brass players get good training in ensemble work, and you can hear it here. The bottom end is supplied by that phat tuba sound (David Ackiewicz) and the dirtier, reedy bari sax (Nathan Sciberras). A good strong bottom end with reliable time and a decent share of the solos. I hadn’t expected drums (Robert Nesci), given it’s a marching band, but I see from pics of the busking band, that Nesci walks with a snare. Nice one. In the studio he played kit. Nesci’s role is quite sparse and often with even feels on the 1,3 (more common on that side of that barricade) and he does it well. And there’s some vocal, too, when Courtney Stark sits in for blues or whatever, sometimes with accompaniment from Cam. 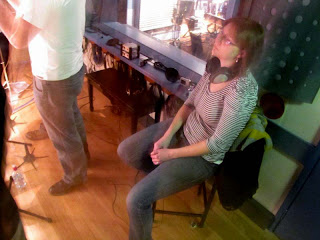 So what did they play? There were some standards of the trad repertoire (St James Infirmary, Sweet Georgia Brown), some blues (Happy blues), a decent percentage of originals of funk and ballad styles, and even a Jackson 5 pop tune (I want you back) that featured an introductory bass line on tuba. And that mainstay of the experience of brass band players, a hymn (Irish blessing). But how cool it all was! Great sound, big brassy chords and deeply entertaining! Great stuff. Break down them barricades!