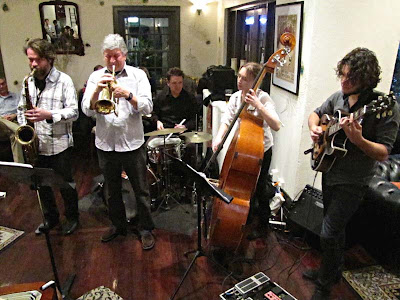 Ah … The Parlour. It’s a new one on me, but I loved it. Swish! Carved woods, inlaid tabletops, red velvets, chesterfields, table service. And perfectly suitable for classy music, like Damian Wright’s flamenco guitar and Miroslav Bukovsky’s quintet. It was a fabulous outing all round. But firstly, the venue. It was a surprise. I knew of the development and I’d heard of its support for good music, but I’d never gotten there. It was much more impressive than I’d expected. Truly salubrious; classy to the core. I remember the daggy, dingy but historical buildings that used to house local government services in this place. Now there’s a five star hotel, new aged foyers, art and Victorian elegance in the Parlour. I’ll be back. 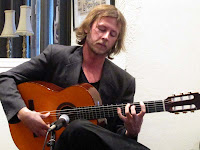 First for me on the day was flamenco guitar with Damian Wright. I’d heard Damian several times with the Translators where plays a fusion style with Steve Hunter and James and Ben Hauptmann. That’s stunning in its own way, but I loved the authenticity of this performance. Damian has spent several years in Spain and continues his studies in Spanish guitar. This is blissful music: sharp fingernail tones; tabla-fast strums that drench you in tense rhythms; barred left hands with fingered melodies; rock solid beats in rhythms of huge complexity. Damian was explaining the accents to me on a 12/8 rhythm: 12-3-7-8-10 (yes, it starts on 12; no, I don’t understand either) and how maracas will concurrently play 4 or 3 to the 12 (I think that’s right) and dancers will perform over the top of all this rhythmic melange. I noticed his foot tapping a rock-solid 4 to the 12/8, but he disabused me of this simplicity. It’s much more fluid. And there was a discussion of how all 12 notes are available in the harmony, although I didn’t particularly notice this. Just fabulous music and a great eye-opener. 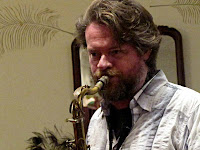 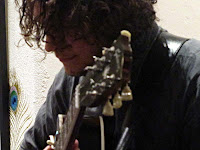 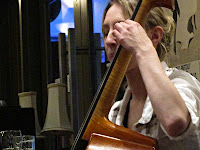 Second was an old favourite: Miroslav Bukovsky leading a quintet with John Mackey, Mark Sutton, Hannah James and Dave Rodriguez. I’ve heard these players and this music many times before, but it remains fresh. Miro’s tunes are a revelation of lyricism and indulgent grooves. This is half the songbook of Wanderlust: what’s not to love? John was again a revelation. I’ve not heard him for a while, what with family duties and loss of venues, so his statements were fresh and clear. He has such a rich sense of harmonic colour; he phrases with clarity and inevitability with phrases that cross barlines with ease; he toys with eighth and sixteenth notes. And his tone is so big: the Parlour and the volume suited him. Damian said of Miro that it was obvious that he was a composer. You could hear that melodic sensibility in his solos. Repeated patterns transposed a few tones; inevitable intervals, or tastefully challenging ones. Miro played the flugelhorn for most of this gig, so it was rural and inviting: such a lovely sound. Dave was his melodic self, with his heavy strings that fight a bent note, but give such a big tone. I most enjoyed his comping: modal chord movements that blended with the soloist to form a moving palette enriching the solo. He said after how he’s enjoying comping. And Dave’s judicious use of effects: not driven, but echoed. Hannah was fluent, rhythmically strong and steady, and well intoned. It was a soft but present sound, that would lift to solos that moved widely and easily across and up the fingerboard to the thumb positions. Sydney must be suiting her, for this was one of Hannah’s favourite performances for me. Lovely work. Mark was pushing from the back, with limited kit so limited tonalities, but not limited rhythmically. This was strong and forceful, and some short but expressive solos that insolently clashed against underlying rhythms with intelligent complexity and easy control. The audience had a treat. A wonderful performance of several enveloping tunes and a few ring-ins including Bolivia, Mal Waldron’s So nice and Bronte Café and ending on an ecstatic Tenor madness and Miro's beautiful and intriguing Peace please. Did I enjoy it? Does it show?