Jazz-trained players don’t just play jazz. Jazz training is a catch-all for a range of syncopated, modern styles and the forefront of jazz has always been a sponge for influences. Last night, I caught Dub Dub Goose and Los Chavos. DDG is a dub/reggae band, and Los Chavos is a latin outfit. Both play insinuating styles that appeal broadly and get the dancers on the floor, and both are seeded with local jazz training. 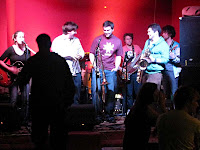 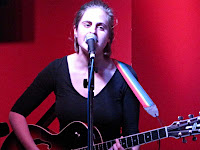 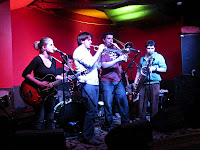 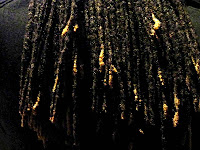 Firstly, Dub Dub Goose. I hadn’t heard them since their first gig at Moruya a few years ago. The Goose is now much more developed, more purposeful and confident, and with a CD under its belt. The band has a firm lead from Beth Monzo, who plays guitar and sings out front. I presume she writes a good deal of the quirky, entertaining and (age-)relevant lyrics. The combination of a strident and uncompromising female voice, the vibrant horns and energy and good humour make this a thoroughly entertaining outfit. 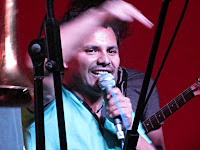 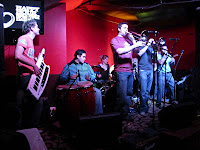 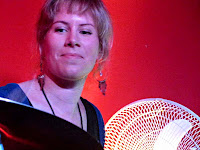 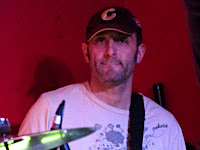 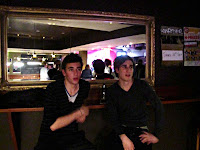 I have also written here of Los Chavos, when they played at the launch of the Canberra Musicians Club. They were good then; they are now that much more alive and confident. Latin is perhaps the master beat of the rhythmic universe, so it’s no surprise to see the dancers pop up when they get going. Again, there’s a front line of horns, and inevitable percussion and interestingly a keytar (someone told me this is what this strange over-the-shoulder keyboard is called, as has been used by Chick Corea and Herbie Hancock and a string of boy bands). I expected simple melodic lines, but Alex Carder was playing some interesting chordal fills with bends, so the instrument defied my prejudices. Otherwise, I noticed the commitment and joy that Andy Jauregui sings with, and also drummer Amanda Waite. I was standing beside the stage when I was surprised by her competent introduction: clear and immediate, seeming to come from nowhere, and leading the band into an instant solid groove.

DDG and Los Chavos were playing at the Transit Bar. It’s quite different from most jazz venues, of course. These bars are more beer-spilled, younger places with pool tables, punchy PAs and DJs in the breaks that are louder than the bands. I liked it. I was there with my two sons, but I even came across an old mate from the Blues Club, obviously determined to grow old disgracefully. So should we all.