It was a ride of great variety when the Alister Spence Trio played at Street Theatre. Alister was playing the first of two concerts by piano trios at the Street. It’s a worthy innovation. They will undoubtedly prove to be two high quality and challenging outings (the 3x2 series). The audience was not large, but reasonable, and the band was presented formally on the theatre stage. Alister was playing with Cameron Undy and Toby Hall. Cameron was sitting in for Lloyd Swanton who normally plays this gig. 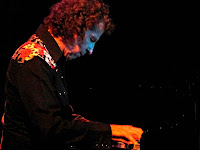 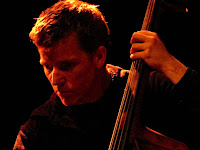 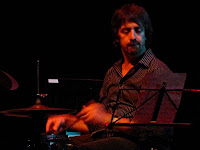 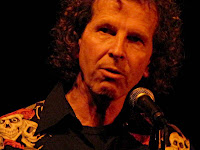 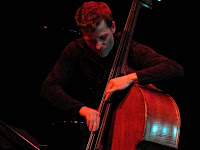 The music started as avant-garde minimalist, one or few repeating chords with subtle changes: almost ambient: intriguing and inward-focussed; sparse bass and ringing tuned percussion. Within a few tunes we were in free territory, with richly dissonant piano going the clappers, with busy bass and drum kit. This was more my territory: grand piano moving easily through dissonances; wonderfully rounded bass tones well into very comfortable thumb positions; lovely cross rhythmic drumming. This was authentic to the form and very capable, powerful playing. Cameron was doing a wonderful job, reading some very complex lines and soloing with clear and purposeful lines. It was an obvious challenge. He showed it in his concentration. The performance was well worth the respect that Alister expressed. Then into a break, and a second half that changed again, to some delightfully lyrical pieces. Still the unexpected rhythmic patterns, but melodic lines that were very pleasing. This was chord running in a ballad sense, rather than bop. Their capabilities in this format were as impressive as earlier. Solos from piano and bass moved from the melody, but were always eloquently relevant to it. Piano and drum solos and grew and grew as long crescendos. Also interesting were the improvised introductions to some tunes against sampled glockenspiel or prepared piano. Alister’s piano were intellectually satisfying in free excursions, lulling in minimalism and expressive against the balladic styles. I also noticed his leadership, where the slightest of nods of glances introduced section changes. Cameron was wonderful in taking on some very syncopated unison lines and carrying them off, and his solos were eminently suitable for the context. I’m always impressed by drummers who know pitch as well as rhythm and Toby played pitch on glockenspiel. But it was really in the drum accompaniment that I most enjoyed his playing. I closed my eyes and found his rhythms and fills and grooves sat with ease with the rest.

The highest quality of playing on music that ranged widely, from modern ambient minimalism to free to ballads. Intriguing and engrossing. Alister Spence (piano) performed with Cameron Undy (bass) and Toby Hall (drums, glockenspiel) at the Street Theatre.
Posted by Eric Pozza at 9:32 am

I saw this gig and totally enjoyed it. The band captured the best elements of trio playing. Original innovative playing combined with emotive intelligent stimulating music.

It would have been nice to see this in a club, but either way to who ever put this gig on, "More Please."