Third of 3 of how many 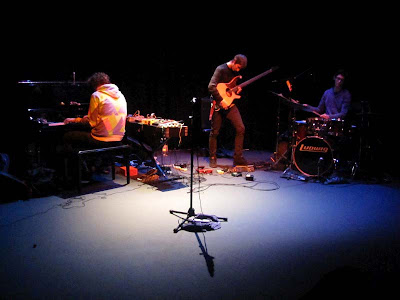 There were three acts for the latest of hellosQuare concert at Street Theatre Two. It’s an intimate venue equipped with a nice PA and decent upright piano and it’s a venue I like: intimate, informal, suited to experiment. 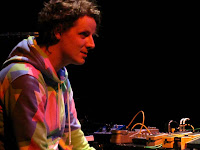 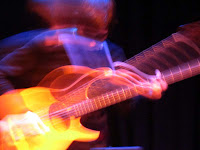 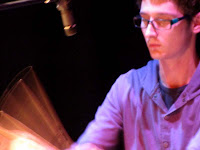 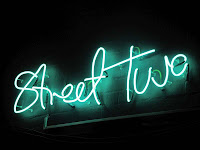 The feature act of the show was 3ofmillions. 3ofmillions plays with effects and presents freely improvised musics with few obvious chordal structures or harmonic movements and none-too-obvious compositional forms. They are very competent players who know how to interpret free and atonal forms and who work well together. That’s doesn’t make it any easier, but it does make the effort worthwhile. What do I remember of this? Some fabulous, frantic piano reminiscent of atonal classical styles; intensity that built and broke and passed through the players with ease; some very sweet walking bass (how unexpected!) at the end that convinced me of the sound of Abel’s unusual instrument (more below); some huge drum dynamics that clashed with ears and other performers, although never purposelessly; an arresting pitch bend effect that Abel used on his bass. I enjoyed this set. Just two long improvs, both capable and impressive even if never undemanding. BTW, Abel’s bass was semi-acoustic, a copy of Steve Swallow’s signature instrument (Citron AE5 Swallow). It has a long (36” scale) narrow neck and 5 strings, tuned E-A-D-G-C on the Swallow original. Abel suggested it excelled in chords and high notes rather than low walking styles, but it heard it as beautifully sweet for a short walk in the band context. BTW, Abel also played with a pick, although perhaps not a copper pick as does Steve Swallow. 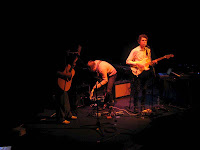 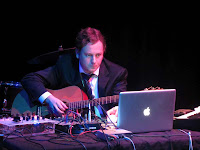 The openers were Cat Cat and Anonymeye. I presume Cat Cat are locals. Three guitars, some vocals, some harmonica, mostly one chord, a constant 4/4 backing track at about 110bpm (for all but one tune where they did 4/4 at 110bpm without the backing track), mostly with recorded tambourine on 2-4. They are described as kraut rockers, with “drifting guitars, droning keyboards and metronomic grooves”. I heard minimalist, ‘60s Doors-like tunes. Enough said. Then Anonymeye. Anonymeye is Andrew Tuttle from Brisbane, who is touring for Sound Travellers. He mostly played acoustic guitar and just a little keyboard, looped and effected. Strangely, he finished with straight finger-picked guitar piece that was, for me, the highlight of his performance. There were mentions of country and folk musics in the promo, but I heard it more as classical style with some degree of crossover to more popular styles. This was decent playing and the electronics were authentic enough when you closed your eyes. But the style (a solo performer mostly twirling knobs on stage) does seem rather indulgent, even onanistic. Maybe I just need to be better trained. I know others say that about jazz solos, but at least the skills are manifestly more demanding.