Out of El Rocco

It’s several times now that Geoff Page has brought our jazz history to Canberra, and it’s a fascinating and valuable exposure. This time it was pianist Chuck Yates, who used to play at the legendary El Rocco in Sydney in the ‘50s, and Ron Philpott, electric bassist with Judy Bailey in Sydney in the ‘70s. They were accompanied by Col Hoorweg, who I remember through the ‘80s backing big names visitors with John Carrick at the Southern Cross Club, and James Ryan, originally from Darwin but once a student here in Canberra but now thriving in the Sydney jazz scene. These historical performances usually cover the generations, and they are the better for it. This was a genuinely hard-ahead outing exploring pre-modal-era standards. The solos were sometimes rough-edged but hard and committed and fluent from all instruments. 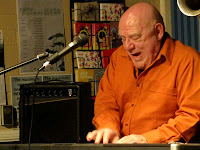 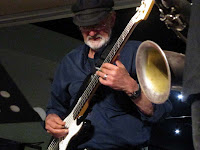 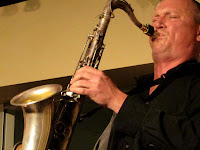 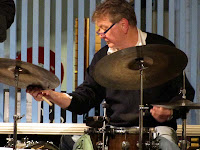 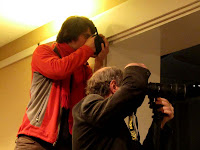 Firstly the tunes. A few from Monk including Round Midnight. I felt a freshness here. These are overwhelmingly well-known tunes, but they seemed to be closely felt, like they were the tunes of the musicians’ era, which is pretty true for Chuck, and not particularly true for younger musicians. Otherwise, lively swingers and latins: I’ll remember April started the night, Invitation, Daahood, and Kenny Barron’s Tragic magic. James Ryan’s A Date with Yate was the one original of the night. There was one fairly short but beautifully stated solo piano piece from Chuck that was recognisable but which I couldn’t place. And a final blues with Sydney-based Canberran, Dan Junor, sitting in on Alto. This one gelled with harmony horn lines (Dan did some great work here, finding unexpected and challenging harmonies), and very diverse styles of solos from the two saxes out front (Dan more clinical and restrained; James letting go with Coltrane-influenced extravagance). Two sets with ten tunes.

Despite, or maybe because of, the years, Chuck is in fine form. His playing was diverse and changeable. His best showed simple but lovely phrasing, a creativity that had him moving freely, sometimes ranging widely over the keyboard, sometimes intervallic or dissonant with altered extensions. His face and eyes gave him away as an effective listener, too. Ron interested me as a bassist and as a blast from my past. He was an unusual proposition: electric bass played with a pick, through a JBL powered Eon PA bin with stereo EQ (he told me it was originally for a stereo Rickenbacker - another throwback to that era - that he used to play but which was stolen). I thought of Steve Swallow but there was little similarity to my ears. It was good solid accompaniment, and the one time I noticed a walk, it was swinging and well formed, but he was more a soloist. And interesting and capable solos they were, well up the neck, lovely arpeggiated phrasings that sounded of sax conceptions. I wasn’t too keen on his tone. It was pretty rough, even for electric, and middy, which is common to electric basses but is not the gentle presence of the acoustic bass. But the soloing was great. Maybe it’s just me reading his age, but James seemed more modern to me. He started with some wonderful Contranesque fast and harmonically rich playing on the opener, I’ll remember April, and finished on that style in the final blues. In between, it was less extreme, more bluesy. Either way, the playing was great. But what got me was a big sound with a slight metallic edge. I really liked James’ tenor. From the stage patter, it was obvious that Col had not played much, if at all, with Chuck before, but he presented well. Col has a unique style and sound. He’s got an interest in tonality and percussion that he used for the introduction to James’ original. He’s a solid timekeeper with a unique rhythmic ear: simple and open, often very cross rhythmic, playing long-sustained grooves that set an environment that’s often in contrast with the other players. It’s this solid and sustained contrary sensitivity that define his drumming for me. Dan Junor sat in on alto for the final blues. Obviously he had little time to warm up, but I heard him as very interesting on harmonies with the tenor, and defined and purposeful in soloing. But one tune’s not enough to know.

So, a historical outing that was both interesting and worthy. Chuck Yates (piano) led a quartet with James Ryan (tenor), Ron Philpott (electric bass) and Col Hoorweg (drums). Dan Junor (alto) sat in for the last tune.
Posted by Eric Pozza at 7:55 pm