A treat on a cold Sunday arvo 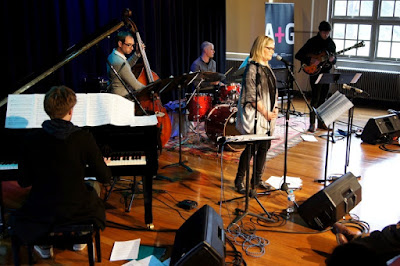 The recording and an accompanying YouTube video feature John Patitucci, no less, but this performance left me feeling not the slightest bit harking for the big smoke of NYC. Matthew Sheens played with a quintet of Australian musicians to launch his new CD at Ainslie Arts Centre and it was a musical triumph. The compositions were fabulous, complex, purposeful things with twists and development and lovely interplays; frequently intense, sometimes even dark. The first tune spoke of a deceased friend and the second quoted the last poem of Auschwitz inmate; Names was a recitation and vocal layering of names of (some) blacks killed by US police over a few days of recording; another detailed the feeling of a lack of place as expressed in French.

And, somewhat strangely, two dealt with clouds (Cloud Appreciation Society and Cumulo-numbus society). Amusingly, Matt told us of an actual Cloud Appreciation society attending the Melbourne concert. And, just one standard for history, Like someone in love. And the performance was stunning. Why would we think "just locals" when locals play like this. I've been listening to the Smalls video feed recently, and it's good to very good but seldom a match for this beautifully formed and developed and blended group. So tight, so powered when call for, or detailed and light when required, all dynamic and crisp and precise. Hugh's guitar solos were expressive blasts, not overly busy but sometimes quick, clear with an echo trail, speaking as the new wave of jazz guitars. Tim Firth was a stunner, not that I expect any less from him at any time; he's always so in touch and ready to drive at a moment's notice and sharp as a tack and he was all that to perfection this day. Lyndon's bass was firm and clear, sitting beautifully in the mix: earlier I thought understated, but there were some easy and wonderfully effective quick fills but the purpose and drive of the bass was never forgotten. Matt's piano was all harmonic richness that spelt out his compositions and led his band and fairly frequent solos alternating with Hugh. Gian, the true local, being a Canberra product, sang as words but also as tones, layering those names through a Boss RC-30 looper, singing pitched lines that not once spiraled into the stratosphere sounding every bit like a pure-toned analog synth. Massively effective. Not a long concert, at a strange time, being mid Canberra afternoon with a bitter cold outside. This concert was a stunner! To some degree any such statement is a personal preference, but I found this as good as it comes, for composition and for performance. A rare treat.