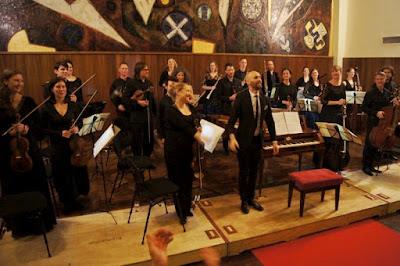 This was another stellar outing for the Australian Haydn Ensemble, this time in a bigger format. They are releasing their first album (with ABC records) as I write this. We'd seen that program on tour in preparation for recording back in December or so. I have yet to hear it, but this was similarly generous in performers and a lovely, early classical style. As they play. Skye led the first violins; Eric Helyard directed and featured on a period fortepiano for a Mozart concerto; Daniel Yeadon performed a Haydn cello concerto. I remain in awe of Jacqueline's bass playing, so fast and neat and crisp, but I can also enjoy others, and I particularly enjoyed watching a few violins in easy visual access (the sound in the Great Hall at ANU University House is satisfying, but the stage is low and the seats are many, so sight lines are not good), Simone and Anna, both regulars and at least Anna is a local product. I was enamoured by the large ensemble from the very start, their accurate intonations and firm statements and period tones but especially the superbly interactive phrasing. Getting the notes is one thing, but getting the internal movements, the flows and peaks and stops and pauses, all together and believable, takes skills at this level, and it was lovely to hear. The music was Michael Haydn Symphony no.25 Gmajor (with an intro by Mozart and sometimes allotted to him), Mozart Keyboard concerto no.14 Ebmajor, and two from Joseph Haydn, Cello concerto Cmajor and Symphony no.83 "La Poule" (the chook). All delightful in the neat and ordered classical way with some devilish lines occasionally appearing. They pulled it all off with aplomb. My modern ear, trained with Steinways and modern orchestral strings, found the solo instruments a bit overwhelmed by the orchestra at times, but I guess that's part of the experience of music of this time. Their instruments were like this. But what a great pleasure and even a triumph.