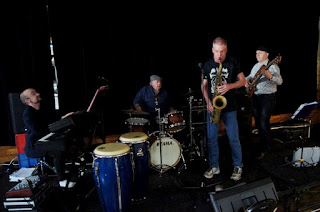 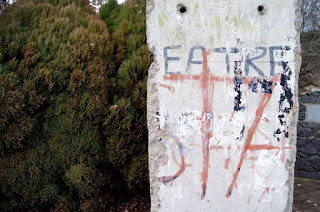 Or at least raining jam sessions. This was a new one, in its first incarnation, at Harmonie German Club, with guest band Dr Jawbone and the Restless Souls. Organised like the monthly blues jam with a tabulated chart for names each sets. This was somewhat less daunting than running with the masters, Wayne Kelly's trio at OCI on Wednesdays. Early this year, there was also a pre-tertiary jazz jam session, at Smiths, fortnightly on Thursdays prior to the jazz sessions. Haven't seen that mentioned recently. Nice to see some activity around the traps. Harmonie was a swing-latin affair. Dr Jawbone played several tunes, including some originals. Peter with his chordal 6-string bass and Ross very busy and bluesy, with Ken and an unknown tenor. Then various jammers, including Claude, Andrew, others. I enjoyed playing George Benson Broadway, but then I like a firm bass groove, and perhaps Footprints was the most conceptually modern take. Good fun for just a first incarnation and good luck for future iterations.

PS. One bit of history. The pic is of a piece of genuine Berlin Wall. Reinforced concrete sections like this (measuring 3.6x1.2m) have become relatively rare as the original was broken up and sold in bits or just broken up in anger when the Wall was demolished in 1990-92. This one features original West Berlin graffiti. Congrats to Gunter and the Harmonie German Club for appreciating the historical value of this early enough to buy a piece for Canberra.