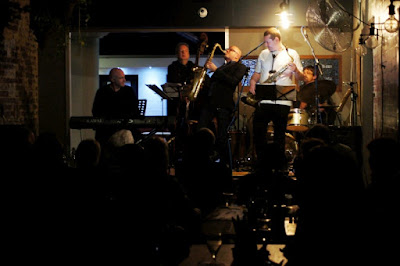 Gavin Ahearn came to the Gods with his quintet of excellent Sydney players and it was energetic from the start. Just a little one bar piano intro by Gavin then into a solid latin rhythm then, within another few bars, harmonies between the two tenors (yes, two tenors, an unusual combination but with history: Geoff reminded us of Dexter Gordon and Johnny Griffin) and hard swinging rhythms and a muscular commitment and drive. The second tune was more Monk-like, swung and walked rather than a bop-latin. Both were originals, one by Gavin, another by a drummer colleague in NYC.

I was enjoying the insistent and unyielding grooves and noticing the solo lines were not excessive, not too atonal, not too busy except for some longer fills that fitted with no jarring. But it was only when we hit tune 3, Little Leo, a ballad dedicated to a lost pet, that I noticed the power of melody here, the clear lyricism in this band. Karl and Jason would each hold back from too much extravagance, letting the flourishes come by themselves, looking for a line that worked, looking for internals and patterns. The melody sat with sparse tones, leading one to another, perhaps falling a little from one to another. This was Karl and he did it beautifully, then Jason came in with tight harmonies. All the time, Brendan was settled or driving, walking or syncopated or dotted rhythms as befits, and Toby also powered, moving through various patterns and rhythmic colours. Then some delightful solos from Brendan - he is playing so well these days - and later solos against riffs by Toby and throughout Gavin, comping chords or laying out his own solos. I noticed some intriguingly modulated piano at one stage, fairly subtle but modernising the sound and drive. Nice. Then more about pets and places. One about the polar vortex that hit northern US when Gavin was in NYC (Jan 2014?). A mention of I sing the body electric, a poem by Walt Whitman (borrowed for an early Weather Report album with Miroslav Vitous). Gavin wrote Nimbus (?) early career and it was a lovely, driving latin. Then more recent and more places: Ismir, an easier latin reminiscent of early morning arrival and sunrise, and Mt Wellington, floating and yearning for the cold misty weather on the summit. Solos were shared between tenors, topped and tailed by delightfully fat-toned harmonies. Dragon flight sounded to me to be angular hell to read, jumping around as the zigzag flight of fireflies over a relaxed swing and syncopated bridge. I'm noticing my foot tapping: 1-3 on latins; 2-4 on swings. Then a light six feel, but with a threat to lift. It did, for final solos and Toby drummed a final solo against busy piano chords and a rise-fall harmonised tenor line. This has the life and instrumentation of '50s hard-bop with a recent, filmic lyricism. Great stuff. Part of jazz's greatness is its respect for history without stultification. Old is new; we are products of history. Gavin and mates did this in spades and with panache.