Again to move on 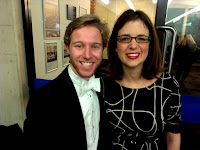 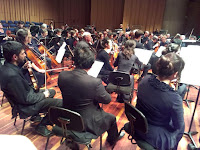 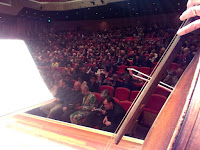 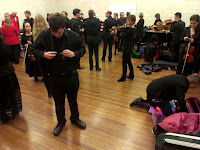 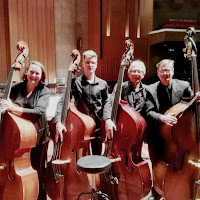 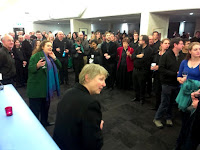 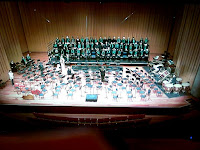 National Capital Orchestra performed Carmina Burana and more last night in Llewellyn with the Canberra Choral Society, Canberra Brass, Turner Trebles and a string of solo singers. It as a mammoth effort that had the stage packed. Two Steinways swapped places with the brass band; the fourteen children in the trebles choir fitted where they could, at one stage off stage; the basses arranged themselves so the singers could walk on and off. Never seen so many timpanis on one orchestral stage. So this was big and deliciously exciting. The Llewellyn stalls were pretty much sold out. The buzz was infectious. This is hugely popular and thrilling music, even if it's one of those pieces that experienced choristers are hark less for. Carmina B was the star of the night, deservedly, but Sean O'Boyle's River Symphony was also big and flowing and I enjoyed it immensely, and a little intro of Wagner Prelude to Lohengrin Act 3 was a blast. I was amused to hear someone say recently that Wagner has loads of ideas and uses them all at once. I could feel that. It's very attractive but a surprisingly tricky piece. The River Symph was pretty much that, flowing, big and lyrical, a tone poem at times with images of waves of strings and beauteous soprano paens. It's another that's big and no doubt expensive to stage. CB is a counting challenge. One conductor I know jokes that everyone can count to four, but these counts were all over with frequent changes of time signature written in an unusual format. This was a counting trial. But again, hugely satisfying, oddly unique and satisfying lyrical. Everyone knows it but not as you know it by playing it. Which brings me back to how strange this classical performance world can be. We work intensely on something for months (professionals, perhaps less time), but suddenly it's over, and on to the next. Over time, I expect you develop a repertoire with opportunities to return to old friends, but in the meantime, that's it. Like theatre but not like jazz, where a tune will be called frequently, so goes through ongoing development never to be finalised. And the development is different: classical is all interpretation and technical correctness; jazz is more harmonic and lyrical development and exploration. Both are valid, of course, but they are very different. I'm elated after the considerable success of CB but also slightly disoriented to leave it as a recent companion. Strange, this. But congratulations to excellent performances all round, by NCO and CCS and soloists and others and not least by my capable basso profundo colleagues, Roger, Juliet and Matthew.