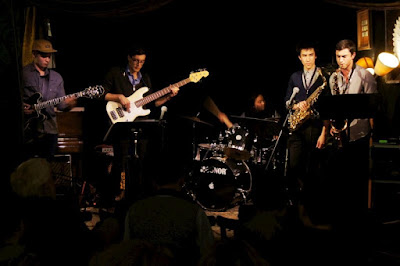 ARC Quartet studied at the ANU, but I didn't know of them even if their faces seemed familiar. They played together in school days at the Prep course. Some members are still studying or performing professionally. They presented as a 5-piece quartet, strange I thought, but presumably a gathering of like-minds and the addition of one mate. In fact, another mate sat in later in the night for a 6-piece. They played a few originals and reharmonisations and the like, and these were my favourites. Standards are great and they are shared so good for sitins, but we have heard them before. Bassist Ross had a nice original harking back to playing rock and metal in his younger days.

That path is not too unusual and the tune was successful. Tenorist James had another original, a latin with a forward calve-feel. I liked that they paid tribute to Australian band, The Vampires, by playing their reggae-feel Mandala. The Beatles made an appearance with a latinised and reharmonised Eleanor Rigby. There was a guitarist in the band, Harry, so I wasn't surprised by a Pat Metheny tune. Trumpeter mate, Matt Nicholls, sat in for Footprints and Misty and they also played jazz hits Tenor madness and Beautiful love, but my favourite of these was Coltrane's Moment's notice - a great tune running through keys with plenty of momentum. I would have liked to have watched these players develop over a few years at the ANU, but I can understand they went to other schools, Sydney, Melbourne, Mt Gambier, and perhaps other things. Drummer Chloe was always precise and I enjoyed how she slowed a tune on request after an excited start. The two horns, James and altoist Alfred, sat well together and each took their generous share of blues-influenced solos. Guitarist Harry was neat and nicely sharp in accompaniment and I very much liked his solos, clear and well articulated and purposeful. Bass Ross was able in walks and accompaniment and impressive in the thumb position heights of his 5 string e-bass. But perhaps the biggest surprise for me on the night was the reception for St Thomas. I've long felt it's a daggy tune but the calypso feel is infectious and this one was the best received of the night, and perhaps the one played with most breezy abandon so I must reconsider. That's how calypso should be, reminiscent of carefree people on white sandy beaches, and nothing like the days preceding a dismal election. This is much nicer: thinking sunny with ARC.