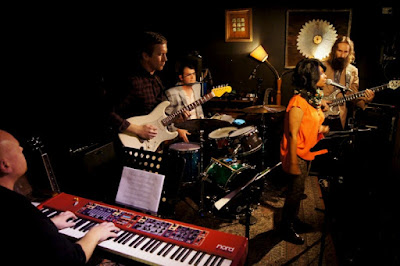 This was as close as I'd ever been, or was ever likely to get, to the authentic voice of Motown and its ilk. Vivian Sessoms performed at Smiths with our local band, PJ Junior and The Soul Pimps. I hadn't know of Vivian, but she came with an excellent CV, having collaborated "on stage and in the recording studio alongside immortal artists the likes of Michael Jackson, Stevie Wonder, Sinead O’ Connor and Ryuichi Sakamoto, to mention just a few". Wow, serious.

A woman born and bred of a musical family in Harlem with a history of church singing. And interestingly, an activist to boot. She'd visited Australia before and this time came to Canberra and Smiths. And her band? PJ Jnr... has impeccable membership but I'd only managed to catch the band once before. Together, this was a stunner. Jazz and popular song distilled with fewer chords and deep, funky grooves and that authoritative voice over. Vivian led with dynamics that would turn on a coin, powered then pp. We could feel the cultural differences, too: our tame responses drawn out; the demands from Vivian and her commitment in return; not common Australian territory. Sometimes you feel delirious with the strength of the emotions; not once I felt goosebumps. Totally apt with demanding masterpieces like Billy Strayhorn Lush life and political paens like Nina Simone Feeling good and Billy Holliday's racial lament for all time, Strange fruit. There were serious undertones, with Amy Winehouse Love is a losing game or Leonard Cohen Hallelujah and marks of respect to common heroes, Prince Under the cherry moon and Stevie Wonder Superwoman and also a few Cole Porter evergreens and even some light-hearted responses to the pop charts, Icona Pop and Amerie. What we heard were mostly takes from her new album, soon to be released, although with our local band. Nothing lost here: they were great: James with force of nature grooves and the tightest tones; Aron considered and clear but also echoing and explosive; Damien varied in keyboard tones and rich with arpeggiated colour; Kay firm and solid and understated. And determining and guiding it all, Vivian's voice that would soar or bend or jump or luxuriate in accent or inflection. The voice of '60s R&B and beyond: cultured and resolute, too often knowing and forlorn, and the essence of internationalised American popular music. Wow: here on stage, amongst the few at Smiths, available for a chat after. Worthy of the big stage; available in intimacy. This is what we chase, these precious moments available if you keep your eyes open to passing opportunities. A little bit of Motown and authentic Harlem and the like here at Smiths for the night. Fabulous.