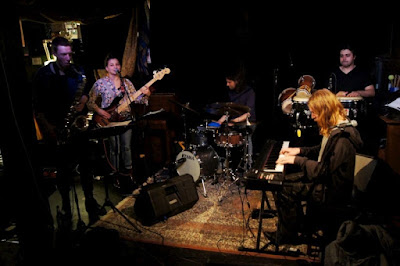 Ignore the various new-age remedies and go to a Latin gig. This is genuine life enhancement. There's something deeply satisfying about the driving rhythms, the repeating claves, the busy interaction of various percussions, the colourful regularity of the piano comping called montuno, the space for adventuresome improv. I caught ClaveMania at Smiths. ClaveMania with a accent on the -i-. I didn't catch all the tune titles, written in Spanish and spoken as they often were with an accent. My weakness to not recognise the language.

The music was virtually all originals, mostly written by pianist Jonathan, but also a few by bassist/singer Elizabeth. I loved all the tune, but my favourites were the songs: voice is something special and has a special immediacy in this music, imploring female with responses from paired males. Deeply satisfying. Strangely, too, Tom Fell on tenor was perhaps the most adventurous I had heard him. The regularity and repetition of the latin grooves suggests less abandon, but Tom let go in ways that I hadn't heard before, throwing blues licks to the wind and slashing with contemporary flourish. Unlikely, but I heard just this. Then Jonathan, soloing with that latin presence, strongly aware of rhythm, rhythm as the key and the underlying purpose, but tuneful throughout. There were also solos from drums and percussion, supremely aware of the beat, embellishing with care. I liked how the longer patterns of percussion and tuned skins moved through the shorter drum bars; how the clave would remain central if contrasted with some other tone and groove. And Elizabeth's bass, recognising the grooves and claves but with a common half-beat anticipation. It's one essence of latin. An unnamed ballad in ABAB form written by Elizabeth was a expected surprise. But mostly back to the lively street life feels, telling stories of streets with chess and more, Callejuela, or a string of other latin styles, known by name but too little by performance, like descargas or salsas or sambas. Even Yidson, an original development and cross between Yiddish folk and Cuban Son. Suffice to say I enjoyed this lots and it's great to have such an authentic latin band, in this case of origin Colombiana, here in Canberra. Great! Looking forward to much more.

PS. A final cheer to the hen's night gathering I crossed paths with after Smiths. Obviously having serious fun. It's a pleasure to photograph a group with such self-aware presence. No names given; none even known.
Posted by Eric Pozza at 10:36 pm

It was a great gig.
Thanks for the write-up Eric, and great to meet you there. Have fun with Carmina tomorrow night!