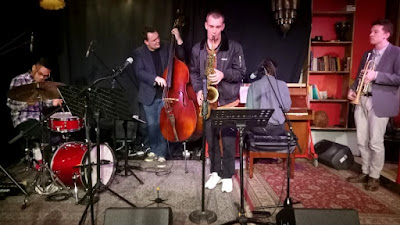 Two concerts on a day and the second a double album launch. This was a mixed band of mates from the James Morrison Academy of Music in Mount Gambier. We've seen them before at Smiths. They are recent graduates and they are good. They play as a quintet but this time they were around to launch two albums: those of saxist Lachy Hamilton and trumpeter Mathew Nicholls. Lachy and Matt up front with rhythm section of Harry Morrison, Patrick Danao and Matt Harris. This is a hard-ahead style, somewhere after bop. Mostly originals (and interesting they are) accompanied by the standard jazz repertoire of the style (this night Recordame, Beatrice, I love you and Body and soul). Matthew's originals were varied in theme, perhaps images of events or memories of people: ible ible or Light of the world or Pumpkin fingers. Lachy's theme was the allegorical novel, the Alchemist by Paulo Coelho, so his titles were more obscure: Crystal merchant or Urim and thummim or just the Alchemist. But both provided fascinating structures and musical themes and some seriously hot playing. These guys are good and they are well trained. A great listen.