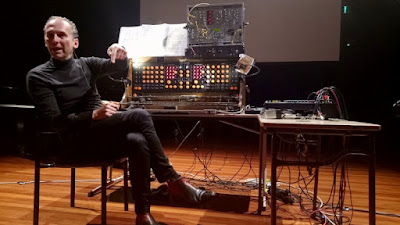 Electronic music synthesizers have a fairly short history even if they are now omnipresent. I still remember first seeing a MiniMoog and an Arp Odyssey but they were from the '70s. The earliest synths were from shortly after WW1. The theremin is perhaps best remembered. It was a weirdly bending sine curvy instrument used in scifi films of the time. Didn't it feature in Forbidden Planet with Robbie the Robot? Also of that era were some veritable electronic synths, the French Onde Martenot and the German Trautonium. I drove an onde martenot with its performer, Nadia Ratsimandresy, after one CIMF but never heard the instrument. I didn't miss the Trautonium played by Peter Pichler at the School of Music. Peter was touring Australia from Europe. The event was a lecture recital, so we learnt of the instrument, strange and otherworldy as it is, were introduced to the developers and composers and heard solo and accompanied performance.

Peter is classically trained; this was not pop (Radiohead has used the Trautonium) although it was varied and he touched on techno. Mostly he played classically-composed music, not least Hindemith Concerto for Trautonium and strings (1931) and Genzmer Sonata for Trautonium and piano (1949), but he also added some live soundtrack accompaniment to Hitchcock The Birds and Metropolis and Dr Caligari. I bought the CD (limited edition 80/100 copies for the Australian tour) and it includes some truly incredibly authentic kookaburras. It's an unusual instrument but not excessively strange these days, given the commonness of electronic sounds. In its days, on German radio, with its own performance shows, it must have been revolutionary. Certainly, it sounded big and full and fat, although this was with modern amplification. Even speakers were different then: their history is not so different. We were informed of the sawtooth waveforms, the non-tempered chords and individual controls of notes, the unique keyboard (a wire touched to a metal plate); the immense dynamics that were possible with a technology he couldn't travel with; the displaced speakers and noise generator and fat orchestral octave sounds. It was used for 300 film scores. Perhaps my favourite were the piano-accompanied pieces, where the trautonium took on a string-like solo role but with massively divergent tonalities. Peter was very well accompanied by local student Ronan Apfer. The trautonium is a rare instrument and a thing of history, but it's huge-toned and fascinating in its ability to slide notes, portamento, and manage noise and has those odd chordal sounds that clash but intrigue and can change tones within and during notes. And more. Synths have come a long way and are immeasurably cheaper but this was fascinating and a great, unexpected pleasure.

Peter Pichler (trautonium) gave a public lecture-recital at the ANU School of Music. Accompaniment was by Ronan Apcar (piano).
Posted by Eric Pozza at 12:05 pm