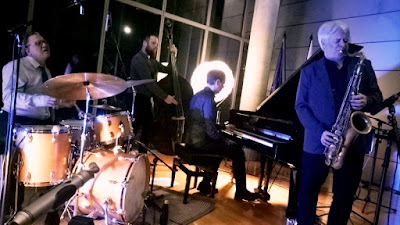 David Braid is from Canada and his band was called The North and they are certainly from northerly climes (two Canadians, a Finn living in Sweden and a Dane) but this music was hot. Quite different from some music I've encountered in this space at the Finnish Embassy. I've heard David twice before on visits to Canberra and each is quite fascinatingly diverse. He's clearly classically trained and we hear it in his sonorous solos and in his discussion of jazz composition in the style of Sibelius. One visit was with a string quartet playing his compositions. But this was a clear jazz outing with grooves and some swing and some fabulous crossovers (perhaps these days we'd say intersectionality) that's the essence of contemporary music and society. Coltrane was evident and Lee Konitz was an influence but some earth sounds picturing Novia Scotia were virtual electronica-sounding from sax and to my ear were fascinatingly common with renditions of the Australian bush. I wondered if wilderness has some commonality everywhere, imaged from an increasingly dominant urbanism and receding before climate change. Despite the late night (their 5.30am, after flying in just the day before) this band was on fire. Tenorist Mike had the most glorious of hard-edged Selmer tones but could meld and twist and soften as will. There were some seriously satisfying lines that spelled originality but also great listening.

The band played acoustic in a reverberant space and the piano comping was sadly mostly lost from my location behind the louder sax, but David's solos were arpeggiated and developmental and extended and deliciously sensitive. Bassist Johnny was strong and loud, despite no amplification (Why did this cut through and not so much the Yamaha C5 piano? Perhaps my location or a clash in common pitch?) fast and high into thumb positions for solos and nicely syncopated for accompaniment. They dropped out, occasionally for effect and that, too, was powerful. And drummer Dane Anders drove and swung hard, playing fairly mainstream and rich and full, sometimes with brushes, some swapped fours and to my ears highlighted by an immersive solo of density and volume with distinct, snappy accents that floored me: power and purpose and quite magical. They played most of their recent album which won Canada's top music prize, the 2018 Juno award for Jazz album of the year (group), so I'm not alone in my pleasure at hearing this outing. Canberra was early on their Australian tour. They are off to Sydney and Perth and perhaps more before Casalmaggiore and Malmö: catch them if you can. And thanks to the ambassador, who allowed some extra seats so some jazz-tragics (including me) could get in after the show was an early sell-out.