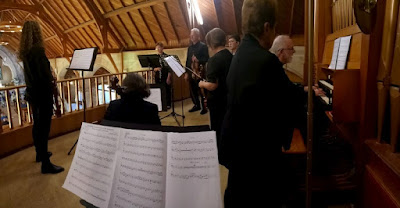 This was a lovely little concert. The location is special and old for Canberra: not exactly Notre Dame but it does have gargoyles. It was All Saints in Ainslie, the Sydney sandstone, gothic-styled Anglican church built in 1868 at Sydney's Rookwood Cemetery as one end of a mortuary steam train track, used until 1939, dismantled in 1958 and reconstructed in Canberra. The event was part of the Heritage Festival given its history.

The group was called the Rookwood Ensemble playing chamber music, this day mostly of Vivaldi, in the organ loft with the mechanical pipe organ. The organ is itself historic: built in 1857 for a Baptist church in Harrow, UK, and transported to Canberra for dedication in 1990. I just played two pieces and there were another two trios for oboe, violin and organ. Caroline, Heng and Terry were the key performers on the day and well deserve praise for some wonderful solo features. It's odd playing in an organ loft with half your audience sitting with their backs to you, looking to the altar. Even for those with seats turned to the back, there was little too see, with musicians viewed from below and largely hidden by railings. But the music was lovely and the group was capable and the acoustics are satisfying. I was particularly taken by Vivaldi's variations on La Follia. Amongst other works, we played a chamber arrangement by Terry, our organist, of an organ concerto by Bach, arranged from a work by Vivaldi, his violin concerto Grosso mogul. This had possibly the longest count I've encountered (strings don't count like brass): 103 bars of solo organ. Then a finish and an afternoon tea, as is the way with such events, and much good cheer by the performers and others.