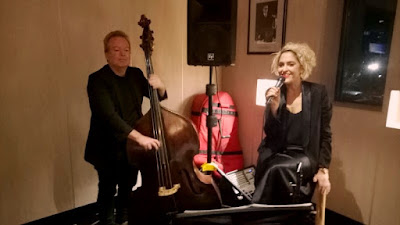 I was interested not just because they are two musicians I admire, but because of the unique musical pairing. I recently played a piano/bass duo. That's common enough and very satisfying with its spacious opportunities. But I doubt I've ever heard a vocals/bass duo. No (or very few) chords; a limited source of rhythm; open, even sparse sound. It worked a treat. I never doubted it would with these two but I did wonder how effective ti would be. Sally superbly states her melody, bends and embellishes and manipulates it, toys with it as improv and more widely is just superbly clear in intent amidst whatever complexity. Brendan spells out the most solid of rhythms with endless skips and harmonic vibrancy, playing into the thumb positions, but mostly steady and solid lower down, moving though chords but never querying harmony (at least not unintentionally), richly busy and inventive, and often enough throwing in some chords (although they don't work quite like midrangey and more chord-able piano or guitar) . So this was an unusual combination but never without interest and authenticity and always convincing. They were playing the standards: the very common blowing tunes but also some darlings like Come rain or shine, The very though of you and Old devil moon or the superb and demanding Nature boy. The standards repertoire is witty in music and lyrics and frequently romantic. Sally touched on this when mentioning that they are a married couple and that to play this gig was quite lovely. And it was. Fabulous music from an unusual combination that worked a treat.