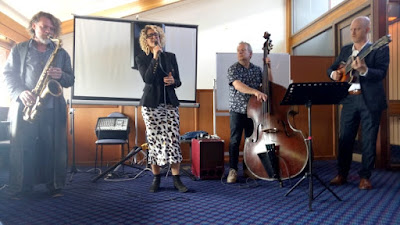 I would think it would have been nerve-wracking. Sally and Brendan and John and Greg are great musicians and I guess they've been through it before. This was a mid-morning concert for a bunch of retirees and later who get together weekly to listen to and discuss jazz. So not a club atmosphere. Four up front and a several rows of seated, peering eyes and often-enough wilted ears. But it was great and it was wonderfully received. They played mostly American songbook with voice and two instrumentals from the standards repertoire. There was a threat (and a request) to play Giant steps, but perhaps too early in the day (John was keen). But none-the-less this was great music with a modern edge and some fabulous playing. Brendan blows me out always; so do Greg and John, of course. Greg was playing a semi-acoustic at virtually acoustic volume, so earthy. John was slithering through whatever he played and with the most detailed and intriguing lines. I've just heard Sally once before, again with this repertoire. What a nice, controlled, firm voice! Fabulous. [Same goes for her pop tunes. Check them out on YouTube or Spotify and share widely. Search Marét Vertigo or Maret Perfectly imperfect. They are catchy, wonderfully confident and with great videos]. The tunes this day were jazz: All the things and Old devil moon, and Paper moon and Little tear and Witchcraft and Body and soul and a few others. Interpreted with personality and emotion; embellished with lithe sax; soloed by all; underlaid with the most firm and swinging and interesting bass. Best morning tea gig I've heard for some time!