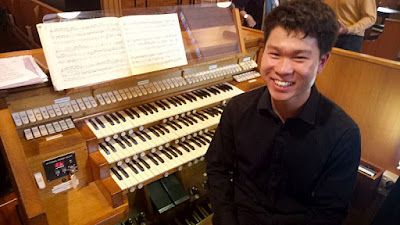 It was Anzac Day and Jonathan's program was entitled "From anguish to hope...". By that hour, it was an alternative to Two-Up which is interesting for once in a year but hardly cerebral. The anguish was for lost friends and relatives in wars: virtually all the performed composers lived through WW1. Then through a French heroic chant and an elegy and a prayer. But there was also redemption or joy, the hope of the title, from Messiaen and a final prelude by JS Bach.

All performed on the organ at Wesley Church. Organ music can be delicate or overwhelming; it's stolid with those deep pipes but also playful, birdlike with the high pitches. The tones are stable given notes don't change once played: just on or off. But the interplay of tones and of emotions is profound. It's also the biggest and loudest of the pre-electronic instruments so fills big spaces and must have amazed its early listeners. This was further informed here with cameras linked to TV screens so we could view the manuals and fool pedals. An interesting innovation! Great news that Jonathan has obtained the 2019/20 organ scholarship to study at Hereford Cathedral, England, so as to fill far larger spaces with more popes and with the added amusement of watching Brexit close up. This was lovely playing, variously fresh and lithe or heavy and ponderous, and a satisfying program. We'll be hearing from Jonathan over coming months (he leaves in August), but best of luck with the bigger pipes of Hereford.

Jonathan Lee (organ) gave a recital for Anzac Day at Wesley Church.
Posted by Eric Pozza at 11:50 am